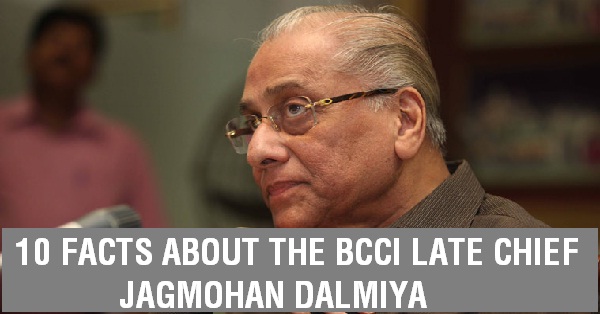 We at RVCJ are deeply saddened by the sudden demise of the great veteran administrator.

Lets learn some key facts about the Late Chief Of BCCI :

1. Jagmohan Dalmia returned to BCCI Chief post exactly after a decade. His previous tenure of Chief of BCCI ended in 2005. 2. He joined BCCI in 1979 and went on to become its treasurer in 1983. He along with bureaucrat Inderjit Singh Bindra helped in bringing the World Cup hosting rights to South Asia in 1987 and 1996. . He was also elected as the chairman of cricket’s international governing body, ICC (International Cricket Council) from 1997 to 2000 after which he was elected as BCCI Chief in 2001. 4. In 2004 when his tenure was to expire, in BCCI elections he cast 3 votes, firstly “as an individual member of BCCI”, second one as ” a representative of the Cricket Association of Bengal” and third one which was due to the votes tied, he cast as the chief of BCCI, to make him proxy candidate Ranbir Singh Mahendra win. 5. Despite Ranbir Singh Mahendra was elected as BCCI chairman, Jagmohan Dalmiya continued to be in power by the consent of other members of the board and served BCCI as “Patron-in-Chief” for first time ever. 6. He was associated with BCCI from 1979 and later in 2005 was shunted from it when his proxy candidate Ranbir Singh Mahendra lost to Sharad Pawar in 2005 BCCI elections. 7. He was expelled from BCCI in 2006 for charges of misappropriation of funds during the hosting of 1996 World Cup. He chlaanged the charges in Supreme Court where he was exonerated as BCCI was unable to prove the charges against him. Later he returned to CAB (Cricket Association Of Bengal) in 2008. 8. Jagmohan Dalmiya returned to BCCI as interim president two years ago, during the investigation of IPL spot-fixing case in 2013. 9. On 2nd March 2015, Jagmohan Dalmiya returned to the power by replacing N. Srinivasan after a 10 year gap. N. Srinivasan who was also the owner Chennai Super Kings IPL franchise, was stictly barred by Supreme Court Of India from contesting elections over conflict of interest. 10. Jagmohan Dalmiya was unanimously elected as the Chief of BCCI previously this year after no candidate stood against him. The BCCI lost a gem today and all thoughts for the friends and family from RVCJ team. May the soul Rest In Peace.

You can express your thoughts in the comments below.