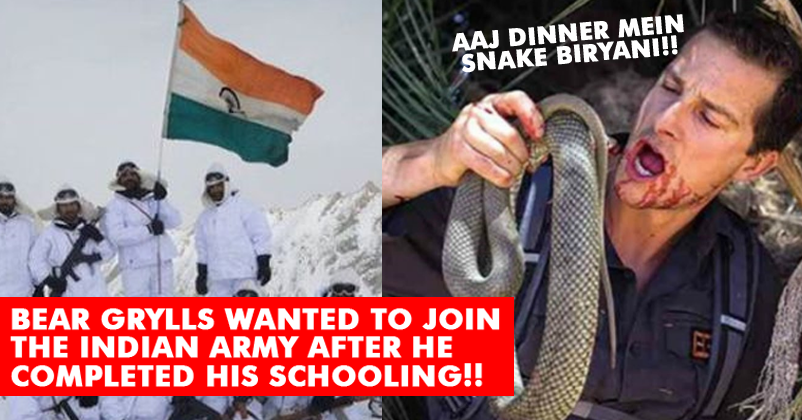 Who is Bear Grylls? Now, that’s a funny question. It will be a great surprise if you don’t know who he is. He is the real life hero for millions of people out there, who love to watch his show with an awe feeling every time, as if it’s the first time. The man has literally defeated the word impossible more times than we can count. Today, we have collected some of the lesser known facts about him. This will definitely bring you closer to him more than ever. Read the complete article to find out.

His real name is not Bear Grylls, his birth name is Edward Michael Grylls. Apparently, his elder sister named him Bear when he was just a week old; this was because he was a wild sport. He has definitely lived up to his name and has created a legacy for multiple generations to live with, and is certainly nowhere near the end. Bear Grylls initially wanted to join the Indian Army after he completed his schooling. He spent a good amount of time in India, trekking at the Indian Himalayas and hiking through Darjeeling, West Bengal and Sikkim. He always wanted to be an adventurer and saw Indian Army as a great opportunity to fulfill his dreams. When he was asked about India and his thoughts of joining the Indian Army in an interview, he said,

“I spent quite some time in India before I joined the army. I went out there climbing, and up in West Bengal and all around Darjeeling. I love India. We were in Calcutta for a while and then we were with the Indian Army as well. It’s a place I really love, and I’m really looking forward to getting back there for a long time.”

From his words above, we can see how much he loved India and the adventurous life of our Armed Forces. This is definitely something to be proud of. In 1996, Grylls met a freefall parachuting accident in Zambia. During An SAS Skydive from a great height, his parachute rat a height of 16,000 ft above the ground and he broke his vertebrae in three places in this accident. 18 months after breaking three vertebrae in the accident, Grylls achieved his childhood dream of climbing the summit of Mount Everest in Nepal on 16 May 1998. At 23, he was among the youngest people to have achieved this feat. He was always wanted to be the person he is today and obstacles that came up, were not something that could stop him from being that. While preparing for the climb to the top of the Everest, he scaled the Ama Dablam and became the youngest person from Britain to have completed this heist. Interestingly, legendary mountaineer Sir Edmund Hillary described the peak as unscalable. The Ama Dablam is indeed considered as one of the most extreme peaks on earth. As soon as we begin to conclude that this guy cannot go more extreme than this, he proves us wrong again and again. Interestingly, he holds the world record for the world’s highest open-air dinner party, which he shared with Lt Cdr Alan Veal RN. It was held in a hot air balloon at a height of 7,600 meters. Grylls, along with the double amputee Al Hodgson and the Scotsman Freddy MacDonald, set a Guinness world record in 2008 for the longest continuous indoor freefall. The previous record was 1 hour 36 minutes by a US team. Grylls, Hodgson, and MacDonald, using a vertical wind tunnel in Milton Keynes, broke the record by a few seconds. The attempt was in support of the charity organization Global Angels which works for the welfare of children. In 2003, Bear led a team of 5 people across the North Atlantic ocean on an open boat. The boat was 11 metres long and it faced extreme climate change and icebergs during the historic voyage. Among his compliances was his childhood friend, SAS colleague, and Mount Everest climbing partner Mick Crosthwaite. The voyage started from Halifax, Nova Scotia and ended at John o’ Groats, Scotland. In 2007, Grylls went on to create a record-setting Parajet parameter in the Himalayas near Mount Everest. He took off from 4,400 metres, 8 miles south of the mountain. Grylls flew around and looked down on the summit during his flight. He had to cope with temperatures of −60 °C. He endured dangerously low oxygen levels and eventually reached 9,000 metres, which is almost 3,000 metres higher than the previous record of 6,102 metres. The feat was filmed for Discovery Channel worldwide as well as Channel 4 in the UK. While Grylls initially planned to cross over Everest itself, he couldn't do so as the permit was only to fly to the south of Everest. He did not try to fly over the Everest, considering the risk of violating Chinese airspace. These are just a few of his numerous achievements in his life. He has hosted many shows worldwide, among which, Man VS Wild is widely known. He has done a lot of survival shows with celebrities from Hollywood, Sportsmen from popular football clubs, Olympics players etc. He is widely known throughout the world for his exceptional work and showmanship spirit. People refer him as the human encyclopedia for his vast knowledge in the field of survival.

We pray to God that he may have a long life to keep us inspiring. If someone says the word impossible, show him this guy and we are sure that he will think again.

Do let us know what you think about it in the comments section below.

Ever Wondered What Is The Difference Between A Junction, Terminus & Central? Here’s Answer!
Your PAN Card Will Be Invalid If Not Linked With Aadhar Card By July 1! Know The Truth!