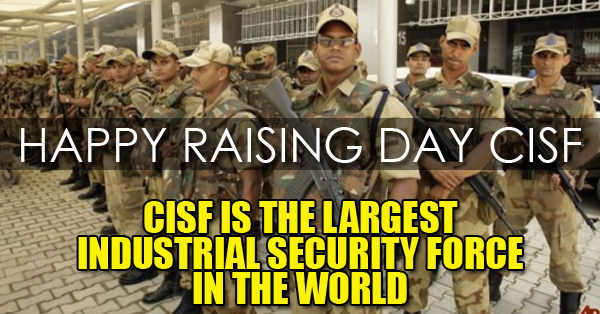 One of the largest industrial security forces in the world, the Central Industrial Security Force (CISF) or केंद्रीय औद्योगिक सुरक्षा बल is a Central Armed Police Force of India and provides security to various Public Sector Undertakings (PSUs) and other critical infrastructure installations across the country. Its motto is ‘Protection and Security’. It has a total strength of about 165,000 personnel in 132 battalions. We bring to you some facts about CISF on its 47th raising day. It was constituted under the Central Industrial Security Force Act, 1968 with strength of 3000 personnel. With a strength of more than 1,22,000 personnel it provides cover to 294 units making it the largest industrial force of the world.

4. Has an ISO certified unit By amendments in CISF Act, 1999 Government of India permitted CISF to offer its Consultancy Services in the field of Security & Fire Protection to Public and Private sector. The CISF Consultancy Wing is an ISO 9001:2000 Unit.

5. CISF is divided in seven sector The force is divided into seven Sectors (Airport, North, North-East, East, West, South and Training) and also has a Fire Service Wing.

6. CISF was authorised for security of private sector companies on February 25, 2009 The Indian Parliament on February 25, 2009 authorised the provision of Central Industrial Security Force security to private and cooperative establishments across the country for a fee with the passage of the CISF (Amendment) Bill, 2008. The Bill, which was passed by Rajya Sabha on February 19 and Lok Sabha on February 25, 2009, also provides for deployment of CISF to protect Indian missions abroad and its participation in the UN peacekeeping operations. Now the Force is providing security cover to 294 units (including 57 domestic & international airports, 79 Fire units and 03 Private Sector Units) spread all over the country. CISF has mastered how to strip and stitch a hot weapon in combat situations and can do it blindfolded.

8. Practice Parkour to the best Parkour is a French way of obstacle training. CISF has created a deadly militarized parkour technique.

9. Has created a deadly commando force

CISF has created a new force of ‘Indian Ninja Warriors’ or the CISF commandos. They are talented in unorthodox warfare and extremely lethal. You can watch them in action on YouTube.

Do not forget to shave your views in comments below.

Actress Padma Lakshmi Made This Shocking & Disgraceful Revelation About Her Past
Trailer 2 Of Captain America: Civil War Released! Spider-Man Has Made The Internet Go Crazy!