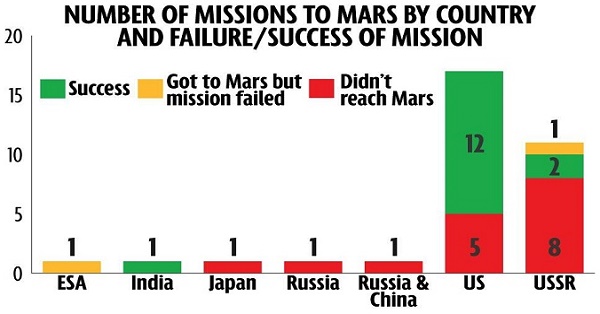 Maybe the greatest fact about ISRO is that it was established on 15th August in 1969 by Vikram Sarabhai. ISRO’s first satellite ever, Aryabhata was launched on 19th April, 1975 from Soviet Union. ISRO’s spaceship to the Mars, Mars Orbiter Mission (MOM) aka Mangalyaan which was launched on 5th November, 2013 and is currently orbiting the red planet since 24th September, 2014. By collecting data from Chandrayaan-1’s Moon Mineralogy Mapper (M3) instrument, NASA concluded that they have found magmatic water or water that originates from deep within the lunar surface. So all hail ISRO. 7. ISRO Becomes The Member Of An Elite Group

With the successful mission to Mars last year, ISRO became the fourth space agency to reach Mars after NASA, European Space Agency, Soviet Space Program. You will be even more proud to know that countries like Japan, China who are far superior in terms of technology have tried to reach Mars but failed to do so. Call me mad or anything but according to me, this is the most important thing that has to be done immediately. The GPS you use daily is very much related with this. To use GPS, we still have to rely on foreign satellites and that means our data is going to foreign countries. To have our own GPS system, a total of 7 satellites is needed. With the successful launch of “IRNSS-1D” on 28th March, 2015, ISRO have successfully launched 4 satellites out of the 7 and they will launch the remaining 3 within 2016. So you will be using your own country’s GPS system on or before 2017.

9. The Cost Of Mars Mission

You will be shocked to know that ISRO’s Mars mission only costed $74 million or ₹4,813,330,000/-. For comparison recent Hollywood superhero-movie, Avengers 2’s budget was a whooping $279.9 million. You want to wish someone “Happy Independence Day”? Wish all those who are involved with ISRO.

Why Should We Respect Our PM – Modi. Insight Of His Achievements In Last One Year
Earnings Of These Female Athletes Will Shock You..!!