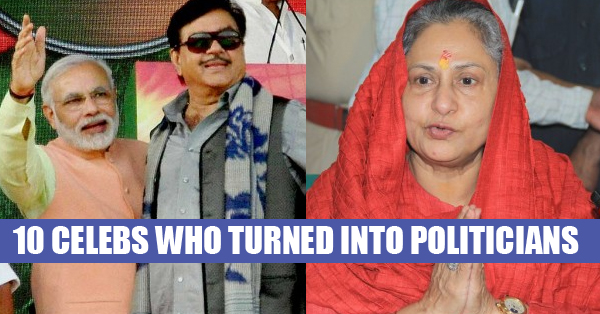 A Rising trend in Indian Politics is Turning Celebrities to Politcians , Why ? Answer is Straight Clear , Just to gain votes from Millions of Fans From Different parts of the country.Having Millions of fan following on facebook & twitter also takes them to limelight of the Politicians. Wife of Big B , Jaya Bachchan a Samajwadi Party Ex- Minister was elected as member of parliament in 2004 , She Completed her term in 2010 , Later she was also re-elected in 2012. In May 2006, Shatrughan Sinha was appointed as the head of the BJP Culture and Arts Department. He won the general elections from PATNA defeating Shekhar Suman an another famous celebrity turned politician.Sinha is currently part of Bharatiya Janata Party ( BJP ). Rakhi Sawant Decided to stand for elections from North – West Mumbai in March 2014 , Within two days of her plans she Founded Rashtriya Aam Party – RAP. But later after loosing badly in the Elections she resigned her own founder party in June 2014 and then joined RPI expressing her desire to work for DALITS in the country. Joining BJP in 2003 , Irani was crowned as Member of Parliament from Gujarat state by the then CM of Gujarat SHRI Narendra Modi , Later in 2014 General Elections she won in Amethi ( Uttar Pradesh ) defeating Congress Vice-President Razhul Gandhi,Then Narendra Modi appointed her as the Human Resource Development minister in his cabinet after BJP Won the Elections in 2014. Not much but little about Him, Javed Jaffrey was an Contestant in 2014 General Elections from Lucknow in which He Was Badly Lost to Current BJP President Shri Rajnath Singh. The man who won heart of “Dream Girl” of Indian Cinema , He was member of Parliament From BIKANER region of Rajasthan representing Bharatiya Janata Party. He is one of the most well known Indian celebrities who became politicians. These 11 Unseen Celebrities Beauty Transformations Will Blow Your Mind
21 Unknown Facts You Must Know About Subramanian Swamy..!!