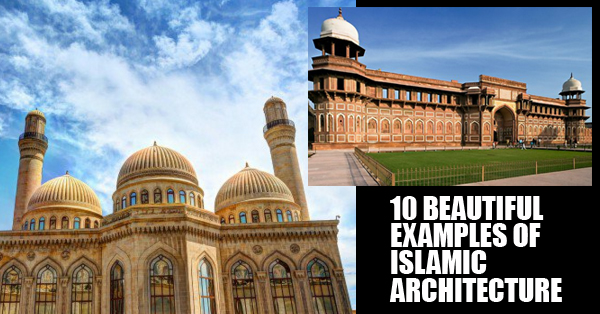 Source
One of the new 7 wonders of the world, the Taj Mahal was built by Mughal emperor Shah Jahan in memory of Mumtaz Mahal. The whole mausoleum is built by white marble. Taj Mahal is universally admired and is a world heritage site and is also one of the most visited place in the world. Source
Sultan Hassan Mosque and Madrassa is in Ciaro, Egypt. It took 3 years (1356-1359) to construct the mosque without even a single day of idleness. Source
Built in the 13th century, Bibi-Heybat (Also known as Mosque of Fatima) is a historical mosque and houses the tomb of Ukeyma Khanum and is the spiritual center for Muslims in the region. Interior of the mosque is decorated with ornaments.

Source
One of the most famous and visited place in Pakistan is the Badshahi Mosque. Built in the Mughal era by Aurangzeb, Badshahi Mosque is one of the largest mosque in the world. Its design is mixture of Islamic, Persian and Central Asian arts.

6. The Great Mosque of Xi’an, China Source
The Great Mosque of Xi’an one of the most famous and oldest mosque in China. The original structure of this mosque was built in 742 A.D. but it was renovated in later periods. But unlike traditional mosque around the world, it has neither domes nor traditional style minarets. Source
The Agra fort is the sister monument of the famous Taj Mahal situated in Agra city of Indian state Uttar Pradesh. The Agra fort is also UNESCO World Heritage site. It is a brick fort with a semicircular plan, its walls are 70 feet high. Source
The Rustem Pasha Mosque built between 1561-1563, during the Ottoman Empire by architect Mimar Sinan for the grand vizier Rüstem Pasha. Now the mosque hosts now a religious school. Source
This one is also an Ottoman imperial mosque located in Istanbul. Suleiman Mosque is one of the most known tourist attraction in Turkey. Source
Situated about 50 km south of Karbala, Iraq. It is a large fortress built with unique defence style. The complex comprises a primary hall, a large Iwan, a reception hall and servants quarters.

Continue Reading
You may also like...
Related Topics:10 Fascinating Examples Of Islamic Architecture