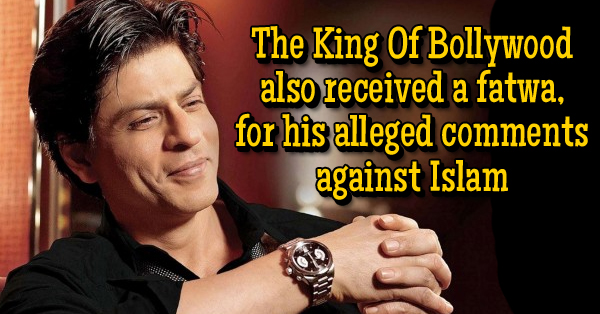 A fatwa is an Islamic ruling in the religious manner, simply put it is an opinion on a matter of Islamic law. A fatwa can be issued by a religious authority in Islam. The people who pronounce these fatwas are knowledgeable on the account of their rulings. From several years fatwas ruled out against a celebrity or an organisation has somehow created controversy in the country. Hence we decided to compile these fatwas for you.

Here are the 10 Fatwas which Created Controversy

A fatwa was issued for Salman Khan when he allowed Madame Tussaud’s gallery in London officials to make his wax statue. Couple of fatwas were issued against Veena Malik, as when she did a reality show to find spouse through it and another one for posing in minimal clothes. Lengendary A.R. Rahman recently recieved a fatwa from Sunni Muslim a Mumbai based group for a film named ‘Muhammad: Messenger of God’, which is first movie of the trilogy of Prophet Muhammad’s life. The King Of Bollywood also received a fatwa, for his alleged comments against Islam. A fatwa was also issued against Harivansh Rai Bachchan’s penned Madhushala for the use of Rubayiat in the poem praising wine. A fatwa was released against Salman Rushdie for his novel ‘The Satanic verses’ which according to some muslim groups said, had depicted wrongful image of Prophet Muhammad. A fatwa was issued against Sania Mirza for wearing traditional lawn tennis clothes while playing. She was suggested to wear long tunics and headscarves while playing the game. In another instance, a fatwa was issued against Taslima Nasreen who is a Bangladeshi author for her controversial comments on Islam on the occasion of Haj and Id-ul-Juha. 9. Against Mosques being rebuilt by Indian army

A fatwa was released by a Mufti in Kashmir, stating that Indian Army should not rebuilt the mosques. The work can only be done by Muslims not by any other religion people. In 2009, during a speech made by Chairman of All India Congress Committee Minority Cell, Imraan Kidwai said- “a fatwa would be released to stop Muslims from joining BJP”.