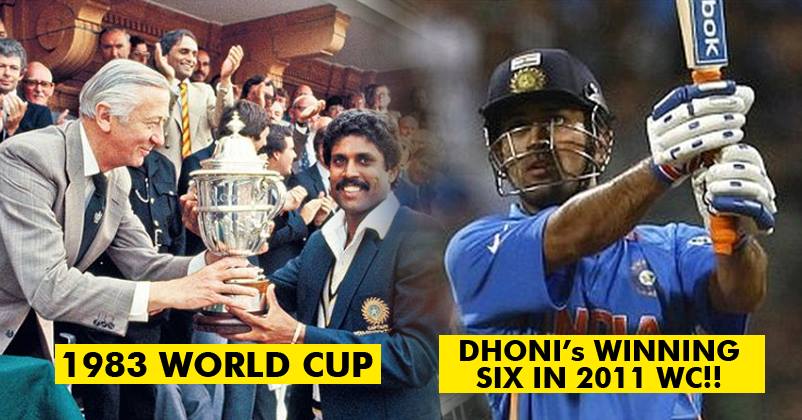 There are two things that every Indian follows: Movies and Sports. Bollywood and cricket are the two religions in India which have brought people together. Cricket in India has become a religion, people follow the game very passionately, and support the team with all their heart. Even though the game didn’t originate in India, but over the time India has become one of the most popular cricketing nations in the world. They excel at this game, they are the best of the best, they have an enormous fan following all over the world. Indian cricket team has so far won two ICC ODI World Cup and the first ever T20 World Cup. It has produced some of the greatest cricket players the sport has ever seen and it continues to do so.

So let’s take a look at 10 Greatest Moments In The History Of Indian Cricket!

1. Day of the victory In 1971 India made it presence felt in the world cricket by defeating two most dominating cricketing nations, England and West Indies in the 1971 test series. The underdog India came to England in 1971 with a record of 15 losses and 0 wins in their 19 Tests. In the third test at Oval, it all changed. India surprised the world. In 1971, India won a three match Test series in England for the first time ever by 1-0. And then India won the five test series against West Indies by 1-0. Defeating these two cricket giants in their own countries was a very big achievement for India. India lost the toss against West Indies and were asked to bat first against the world’s best pace attack at that time. India scored 183 runs only, which many thought West Indies would score easily. It was then, when Kapil Dev said to his team in the locker room, “team if this is not a winning total it’s definitely a fighting total”. The Indian bowlers came to the pitch with a confident mindset, exploited the pitch and weather conditions, they bowled out the Indies team for 140. The underdog India defeated the two times world champion West Indies. When the world’s best batsman squared off against the world’s best spinner, it was a clash of the titans. The popular and iconic knocked played by the master against the Aussies is widely remembered as the ‘Desert Storm’. Sachin scored a dominating 143 to help India qualify for the Coca-Cola Cup final. Anyone who questions Sachin’s nerves in the finals must see this knock. India won the Coca-Cola cup after he scored a smashing 134 two days later in the final against Australia.

4. When something extraordinary happened! It was the time when Australia were on their streak of 16 consecutive test match victories. They had defeated India in the first test of the series. In the second test, the best in the world Australia who had put a gigantic 445 on the board, India was forced to follow-on after their collapsed on 171 in the first innings. It when then when Laxman and Dravid made the impossible happen, their 376-run stand turned the course of the match. Because of this magical partnership India escaped the defeat and recorded a 171-run victory. One of the most iconic moment in the Indian cricket history happened when the Men in Blue led by Sourav Ganguly defeated England in the Natwest final. India had to score 326 to win the match, the Indian innings crumbled and was 146/5. Yuvraj and Kaif brought India back into the game, they added 121 for the 6th wicket. When Zaheer scored the winning run, the Indian fans, the Indian team started celebrating the victory. Ganguly took off his shirt and swirled it wildly, it was in response to Andrew Flintoff who celebrated his team’s victory by taking off his jersey in a match against India in Mumbai earlier that year. Although we failed to win the world cup, were defeated by Australia in a dominating manner. But this was the first time after 20 years when India reached very close to winning the World Cup. Sourav Ganguly’s young Bridgette showed a lot of spirit and heart, it was this young team which would go on to play a crucial role in the 2011 World cup. No one could forget the memorable moments of 2003 World cup, remember when Sachin destroyed Pakistan with his 98. Sachin remembers the match against Pakistan as the best game of his life. After the embarrassing exit from the 2007 World Cup, fans were despaired, players accusing the coach, blaming him for the loss. It was not a good time. Then came the inaugural ICC World T20 which took place in South Africa in 2007. After the senior players declined to lead the Indian team, BCCI appointed the attacking batsman MS Dhoni as the captain. India defeated Pakistan in the bowl-out, lost to New Zealand, defeated England. In the England match, Yuvraj Singh smashed English bowler Stuart Broad for six sixes in an over. India defeated the host South Africa, the powerful Australia, and finally their arch-rival Pakistan in a thrilling fashion.

8. The moment when the entire India cried tears of joy “Dhoni finishes off in style. A magnificent strike into the crowd! India lift the World Cup after 28 years!”. These words are engraved in the minds of Indian fans. These words will continue to reverberate in the ears of India cricket fans forever. This was the night of emotions, it was full of thrilling moments. A huge total of 270 in the world cup final, but we were confident that we will score it. Sehwag’s gone! Sachin hits a straight drive! OMG Tendulkar is gone too, turn off the television! Kohli’s supportive knock and then he’s gone. Out comes Captain cool, he delivers the innings of his life. The entire India was watching, filled with emotions, tears rolled down from our eyes when Dhoni hit that six. One of the greatest cricket moments of all time. Sachin Tendulkar, a name that turned a game into a religion, a name that inspired millions. For any kid who’s born in the 90’s, Sachin is a synonym for cricket. So many memories and a never-ending nostalgia is attached with Sachin. But everything has to end one day, so it was the time for the master to say goodbye to his first love. Sachin’s retirement speech, his final test match, his final innings, some of the most emotional moments in the Indian cricket history. When Sachin touched the pitch for the last time and left the ground with tears, it brought the entire India in tears. Thank you Sachin.

10. Champion of the world Under the captaincy of Captain cool Indian team became the 2013 ICC World Champion by defeating England in a thrilling game of nerves. After the win, Dhoni said in the interview – “I told the boys not to look up to God, he will not come down and we have to perform”. India performed extraordinary in the final game, England required 15 runs in the last over, but Ashwin bowled a fine over due to which England could score only 9 runs. India defeated England by 5 runs.

And This Is How The Times Of India Showed Partiality Against Our World Cup Champions
Dhoni’s Magic! He Hit The Stumps Even Without Seeing & This Is UNBELIEVABLE!