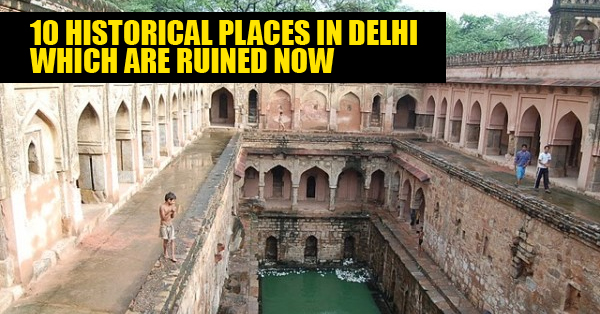 History should be preserved but somehow some of these places in the city, have been brought to a great ruin and are undiscovered ! Here are 10 Historical places that should definitely be visited… and cherished !

At one point, the monument served as a makeshift school run by the village Panchayat. Today, it is used as a go-down for construction material or for parking. Many stray animals have also made it their home.

This great Poet is considered as one of the maestros in Urdu Literature and Poetry, however, his home seems to a neglected and lost artefact in the city of Delhi. Covered by an array of jungles and multi-storey houses, this historical gem of the city has suffered the ravages of time ! Encroached upon by residents and covered with garbage and dirt, this piece of heritage even churned up political conflicts, though with no results ! Thanks to the unconcerned authorities, the vendors use the tomb gate as a free pavement to set up their shops and have created a market in front of a heritage sight. With no beautification for a ‘one of its kind’ monument of this city, this site is treated as a dump for railway sleepers. Treated as a bath house, this structure sufferes the struggles of pollution that poisons its central attraction and beauty ! The oldest surviving astronomical observatory of India, stands in ruins and has been turned into a playground for young children, utterly neglected and disregarded. Standing alongside the banks of polluted water bodies and encroached by a multitude of street vendors from all sides, this piece of heritage has gone to waste ! Clustered with garbage and filthy water bodies, this heritage park is far from being considered an exemplary archaeological invention.

Continue Reading
You may also like...
Related Topics:10 Historical Places Of Delhi That Are Now Ruined !, Delhi, History, Tourist Spots

25 IPL Facts/Records You Should Know Right Away !!
22 Unseen & Incredible Pics From 1908 Which Will Take You On A Tour To Ancient India