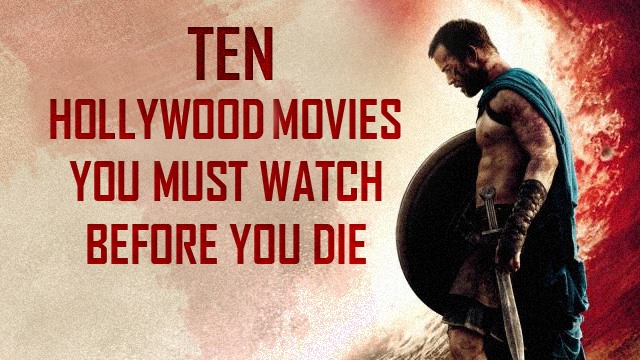 Over the years, Hollywood has set the benchmark for all the film industries the world over. Their movies reek of cinematic excellence in every aspect, be it sound design or cinematography.

However, there are certain movies which defy the norm and stand out of the crowd. These movies will excite you, move you and inspire you. These are the 10 movies which, in my opinion, you need to watch before you die:

Directed by legendary director Stanley Kubrick, 2001: A Space Odyssey speaks of a race between humans and computers. To evolve. Amazing cinematography and apt direction, this movie was way ahead of its times! By the way, did I tell you this movies was made in 1968? You read it right. 1968.

Starring Brad Pitt, Edward Norton and Helena Bonham Carter, Fight Club released in 1999 to a lukewarm response and bad reviews. But with time, people started realizing how good a movie this is. As of now, Fight Club has turned into a cult movie which everyone loves. The movie deals with a plethora of emotions ranging from lust to frustration. Plus there’s the ending with a twist that leaves everyone’s mouth wide open. If you haven’t watched it yet, please watch it now!

Now this is one craaazy movie which is extremely well directed! An ensemble cast consisting of Ben Stiller, Jack Black, Robert Downey Jr., Matthew McConaughey and Tom Cruise! The movie is filled with fun and is guaranteed to leave a smile on your face! Robert Downey Jr. got an Oscar nomination for this one. Oh and by the way, the man in the GIF below is Tom Cruise!

Do you enjoy crime thrillers? Then this is one movie which every such fan swears by! Starring Morgan Freeman, Brad Pitt and Kevin Spacey, this movie will give you thrills and chills galore. The movie revolves around 2 cops; a newbie and a veteran trying to track down a serial killer whose modus operandi to find his victims are the seven deadly sins. You will definitely enjoy this one.

The inspiration for Aamir Khan and Surya’s “Ghajini”, Memento has one of the, if not the most complicated storylines ever seen in a movie. Directed by Christopher Nolan, Memento is one of the benchmarks in cinema. I guarantee you will watch it a second time because you will not be able to figure out everything in the first viewing. One of my personal favourites. If you haven’t watched it yet, I strongly advise that you do!

One of the best sport movies made till date, Moneyball is based on a true story about an American Baseball team which was in the ruins but a new mode of team selection changes everything. Brad Pitt and Jonah Hill perform their roles perfectly. If you love sports, this one’s for you.

This movie will make you laugh and cry. A lot. Starring Seth Rogen and Joseph Gordon-Levitt, 50/50 is about a guy who’s never done anything wrong in his life getting cancer. His chances of survival? 50/50. The movie is an emotional rollercoaster about his journey and is definitely a must watch. Do not miss out on this one. And yes, it is based on a true story.

This movie has winner written all over it. The subject of the movie is enticing as it is. Illusion and Science. Add to that the stellar acting and brilliant storyline with the classic twist in the end, this movie cannot be missed. Watch it and be informed of the true definition of acting, direction and story.

I bet most you have watched it. But if you haven’t, boy have you missed out on something! Heath Ledger at his absolute best, Christian Bale in fine form and Gary Oldman with a brilliant depiction of Commissioner Gordon. And what a story! This is in the list of elite movies of all time! MUST WATCH!

The Mind is the scene of the crime. Inception, in my opinion, is the BEST movie of all time. The minutest of details have been taken care of. The visuals are haunting and the background score goes perfectly. An amazing ensemble starcast consisting of Leonardo Di Caprio, Ellen Page, Tom Hardy, Joseph Gordon Levitt. I’ve only got one word for this movie.
Beautiful.

So how many of these movies have you seen?
What other movies should be added in this list?! Comment and let us know!