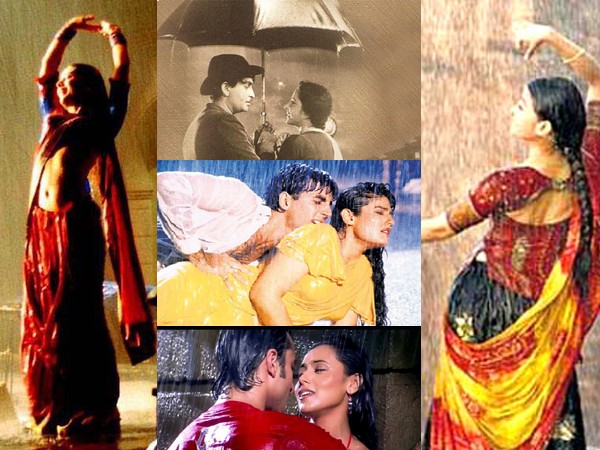 Bollywood is often inspired with rains in many ways like, crying scene, romance, etc. Thus, we actually can’t think Bollywood without rains. The movies have sultry songs and dance with the actress in sari-clad who dances in drizzle.
Below we have list of hottest Bollywood Actresses who have become popular for its rain numbers.

You get to see her in the song ‘Bhage Re Mann’ from the movie ‘Chameli’ that will surely melt your heart. She wore red sari and truly adopts the role of prostitute which is her character for the film.

Watch the song ‘O Saiyyan’ from the movie ‘Agneepath’. This is a rain song that has tragic and also passionate overtones. The actress looks enchanting in her yellow sari, gajras on the hair and a simple black bindi.

‘Barso Re Megha’ from the film ‘Guru’ has a scenery rain song that is very refreshing. Aishwarya looked resplendent in rain number. She flaunts her blue Indian ghagra choli with gajras that accompany the look.

This is an instrumental number from the film ‘Kuch Kuch Hota’ that can be included in the rain songs. She looks amazing here and flaunts the best chemistry with Shahrukh. Also the romantic background score and her red sari will surely make your heart go sizzle.

The title song of the movie ‘Hum Tum’ had Rani Mukherji wearing red sari. The song is too romantic and the lovely video surely does all the justice.

How do we forget “mast mast” girl! Yes the rain number ‘Tip Tip Barsa Pani’ from the movie ‘Mohra’. Raveena Tandon is considered the hottest in this list of rain songs. She looks gorgeous in the translucent yellow sari and the gyrating steps even made it hotter.

The rain song ‘Lagi Aaj Sawan’ from the movie ‘Chandni’ had youthful Sridevi with Vinod Khanna. She was seen in ‘Yellow’ sari’s that looked beautifully juxtaposed. Another bomb shell of Bollywood Smita Patil was seen in the rain number– ‘Aaj Rapat Jaye’ from the film ‘Namak Halaal’. Actor Amitabh Bachchan in this song also playfully tugged her sari on the empty street of a rainy night. This lovely rainy duet is surely the most frivolous rain song.

This black and white movie diva can be seen in the rain song ‘Ek Ladki Bheegi Bhaagi Si’ that is from movie ‘Chalti Ka Naam Gaadi’. This Marilyn Monroe of Bollywood in this is everyone’s monsoon favourite even today!