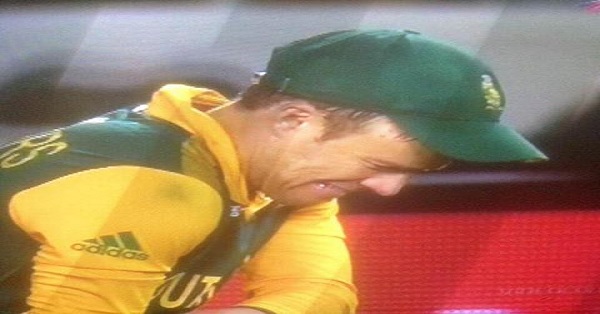 The semi-final match between South Africa  and New Zealand was indeed a great match. South Africa lost to New Zealand but they won our hearts. I’m not saying that New Zealand didn’t win our hearts but still I wanted South Africa to win only because of one man – AB de Villiers. I’m a hardc*re fan of Indian cricket team like most of you but even that can’t stop me from being a fan of AB de Villiers. I mean this man is just the perfect leader. I won’t talk much about his cricket-performances but I’ll let all of you know how excellent he is beside playing cricket. He started playing cricket with his brothers in his childhood but the situation was not in his favour. He had to carry water for them for the whole day and only then he was allowed to bat for some time. He was the national champion in Badminton at under-19 level. He wanted to become a doctor like his father but as we know now that life had planned something else for him. But I’m sure that he would have been a kind-doctor too. He lead the junior national rugby team of South Africa. He got shortlisted for South Africa’s junior national football team, holds many records in swimming, holds a record in 100m run in junior athletics. 7. He Made One Music Album Too

Making an music album was one of his childhood passion and he did an album with singer Ampie du Preez. The album was named as Maak Jou Drome Waar (Afrikaans for Make Your Dreams Come True). The theme of the album was “Follow Your Dreams.” He also donates most of his earnings in a foundation called “Make A Difference Foundation.” This foundation helps brilliant but poor students to join good schools to study.

He carries postcards with his own-signature on them and gives them to his fans.