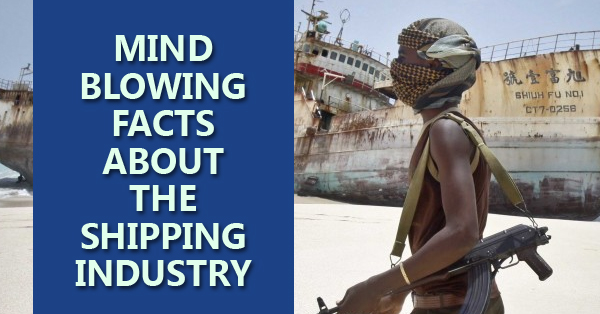 For an industry that basically runs the world economy most people know very little about this huge industry that is the reason of all the different things you touch in your everyday life. From the chairs made by imported woods to the imported food and beverage products you love to eat. From the cars and cellphones and laptops made by imported parts manufactured in different countries to the wheat and rice which are important food for us, all those things were made possible thanks to the shipping industry that has been operating since ages. Shipping industry is the main source of worldwide trade between different countries and continents. Every years trillions of dollars of trade happen through the shipping industry. Source
In 2010, Somali pirates captured a ship and were holding 544 seafarers hostage. Every year, more than 2,000 sailors die at sea around the world, and an two ships are lost every day in the sea. In 2012, the total numbers of attacks on seafarers was higher than the number of violent crimes in South Africa which is the highest-crime nation on Earth. The pirates are the biggest problem for the shipping industry since its beginning. Most of the pirate activities happen in the African continent, and most of the trade route also pass from there. Source
The manufacturing of large ships is very costly, some of the largest ships can cost about 200 million dollars (Around 13.55 billion Indian Rupees)  to build.  Although small ships are large in number, these large ships play an important role in trade and importing stuff.

Source
Females constitute just about 2% of seafarers. People from the country Philippines make up about a third of all crews worldwide, with nearly a quarter million people on ships. Source
There are more than 55,000 merchant ships carrying cargo around the world right now. Source
In 2009, the 15 biggest ships working with this industry released same amount of greenhouse gas as 760 million cars. Compared to trucks and planes  shipping is still the greenest form of transport. Source
Germany and Japan are the two countries with the largest fleets based on total weight tonnage controlled by companies located in these two countries. Source
Shipping is so big that it contribute about 90 percent of the world’s trade.

Source
In 2011 alone the commercial ports of the United States of America received goods from different countries worth $1.73 trillion. The U.S. also relies on shipping for its two-thirds of oil supply. Source
Shipping is one of the first industries which adopt widely implemented international safety standards.

Continue Reading
You may also like...
Related Topics:10 Mind Blowing Facts About The Shipping Industry