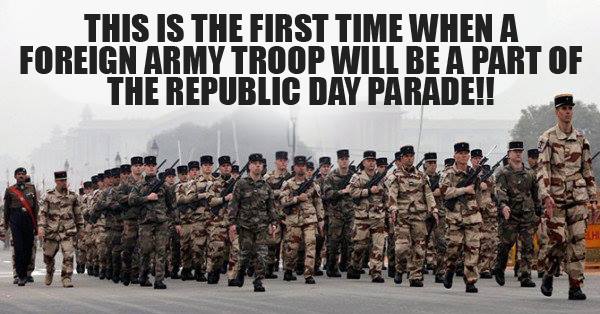 Hence, Read on to know the New things which are expected to happen at 67th Republic Day

1. To make the parade more interesting and agile, its duration has been reduced from 114 minutes to 97 minutes. 2. For the first time in history, foreign troops will participate in Republic Day Parade 3. French President Francois Hollande is the special guest of this year’s Republic Day and the 35th Infantry Regiment of the French squad will look to march on Rajpath. This Republic Day is considered to start a new tradition 4. The Remount Veterinary Corps dog squad will return to the Parade after a span of 26 years. The Dog Squad will include 36 dogs, including 20 labradors and 16 German Shepard. 6. Indian Navy will lead the Republic Day Parade this year. Naval Female Officer Lt. Ambika Nautiyal will be hoisting National Flag at this year’s Parade and another female officer Priya Jayakumar will be leading the Beating Retreat Ceremony on January 29th and will conclude the Republic Day celebrations. The Naval squad will be led by Marcos Commando Navy Lieutenant Anil Raina along with three female officers as platoon commander. 8. Several tableau of disaster relief will be included alongside Indian Navy marching squads. DRDO’s short-range missiles and surveillance radar is also expected in the parade. 9. After a request from BSF, BSF Camel Band of Paramilitary squads will also appear in the parade. 10. Assam, Madhya Pradesh, Chhattisgarh, Karnataka, West Bengal, including the 17 states will be a part of the parade and will showcase their tableau. Besides Central Government’s 5 ministries, Election Commission is also expected to showcase its tableau. Are you excited about this year’s Republic Day Parade. Let us know in the comments section below.

Continue Reading
You may also like...
Related Topics:10 New Things To Happen At The 67th Republic Day Celebrations

8 More Reasons To Be A FAN Of Imtiaz Ali, Which Will Make You Admire Him More
Smoking For A Long Time? This Simple Homemade Recipe Will Clean Your Lungs In 3 Days