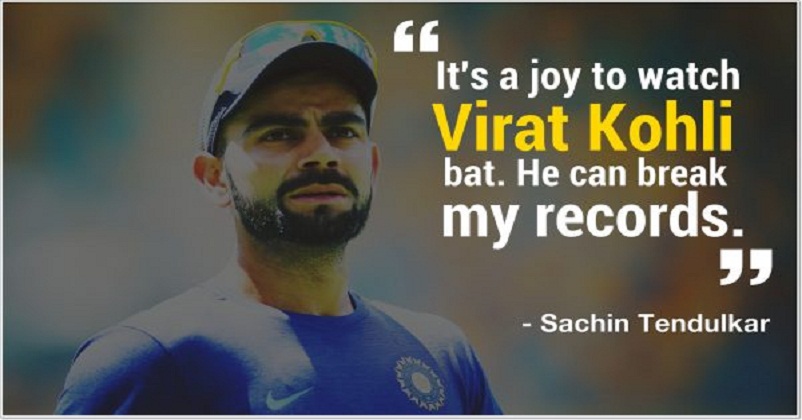 Virat Kohli, the Indian test skipper who is rated as one of the best batsmen in the world. This young batsman is slowly breaking many old records, creating news ones, cementing his legacy amongst the greatest batsmen of all time. Kohli made his international debut in an ODI against Sri Lanka at the age of 19. Before his international ODI debut, Kohli captained India Under-19s to victory at the 2008 Under-19 World Cup in Malaysia.

His performances have drawn a comparison with the batting genius Sachin Tendulkar with many regarding the Delhi lad to the Sachin Tendulkar of the 90’s where the little master carried the hopes of the nation his shoulders. Virat like Sachin has become the mainstay of the Indian batting line-up, the rival teams want to dismiss Virat as early as possible, as long as he’s at the crease, anything and everything is possible.

Although Virat has a long way to go before being cited as ‘ The Greatest Indian Batsman’, but looking at his stats and performances so far, one can definitely call him ‘The Best Indian Batsman’. Have you read 5 Reasons Why Virat Kohli Is Better Than Sachin Tendulkar!

Let’s take a look at 10 Quotes About Virat Kohli By Cricket Legends That Prove He’s Already A Legend!

1. The little master feels that the word ‘phenomenal’ is not enough to describe the talent of Virat Kohli. 2. Simply put, he’s the best batsman in the world. Period. 3. Very few people have the gift to do something special in the world with their talents. Virat Kohli is one of them. 4. He’s the reason why most of the young audience is following the sport. 5. When Virat fails, he comes back even stronger. 6. I don’t think anyone would deny that. 7. His performances has drawn a comparison with the batting great Sachin Tendulkar! 10. He certainly can break Sachin’s records. That’s a big compliment coming from the master himself. We know how much you love Kohli! How would you describe Kohli? Do let us know in our comments section below.

You’ll Never Trust Haryana Govt After Knowing What It Did With Sakshi Malik’s Coach
8 Amazing Similarities Between M.S Dhoni And Sushant Singh Rajput