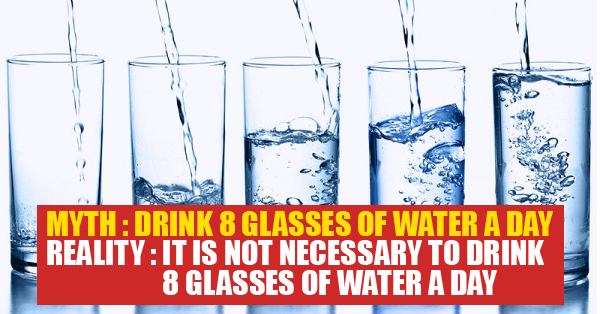 Sometime we believe rumours as facts and sometime there are facts which are taught to us from early age, but as the science improved those “facts” has been proven wrong by the scientists. These are the 10 science facts that were proven wrong. Source
Most of the people believe that we have five senses, but its not true. According to scientists, we have up to 20 senses including thermoception and equilibrioception which are from temperature and balance respectively. Source
Well you thought humans use only 10% of their brain right and guess what they can use if they’ll be able to use 100% of brain right? Wrong! Although a small amount of neurons firing at a time but all others are also playing their role somewhere else.

3. No swimming for 30 minutes after you eat Source
Now you can swim whenever you want, no matter you just ate or not. Although swimming after drinking alcohol is a different case. Source
Many people believe that we should drink at least 8 glasses of water everyday. But its not at all true, the amount of water one should drink depend on your environment, your activities throughout the day, your body size and other variables.

5. Bulls are driven mad by red Source
Yes, this one is also not true. Bulls don’t run towards a matador’s cape because it’s red, they don’t even see it as red its another shade of gray for them. The taunting of matador’s and the waving of flag drive the bull crazy. Source
Although most of the bats species use sound waves to find their way around but bats are not actually blind and they all have working eyes. Many bats even depend on their night vision rather than sound waves. 8. Blood in our veins is blue Source
Those school diagrams just show our vein blood blue for clarity, otherwise the blood returning to our heart through our veins is actually darker red. The blue color of our blood in veins come from the light hitting our skin. Source
Our tongue does not have different taste zones for the flavors. Actually all the zones of our tongue can sense all the different flavors. Source
Well Lighting can and do strike at same place twice or more than that. Lighting’s aim is to find the fastest path to the ground, that’s why tall building, trees are its favorite.

Continue Reading
You may also like...
Related Topics:10 Science Facts That Were Proven Wrong

We Bet You Don’t Know The Reason Why Keyboard’s ‘F’ And ‘J’ Keys Have Raised Ridges!
OMG! This Producer Committed Suicide After He Watched Preview Of His Own Movie!