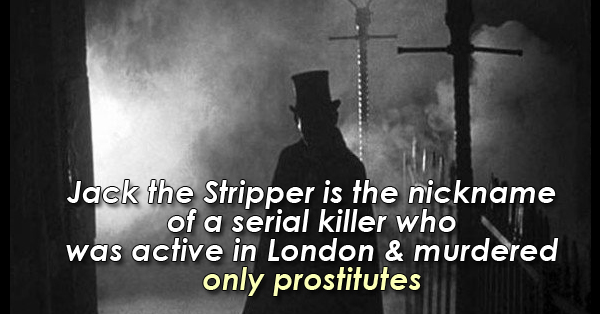 Serial killing is there for centuries, sometimes good people suffer terrible, unexpected fates, while bad people are free to go along their merry way. Below is the list of some of the most dangerous serial killers who have never been caught.

Charlie Chop-Off had a habit of stabbing African-American boys, and subjecting them to genital mutilation. The killer murdered a total of five women, his victims were raped and strangled.

Stoneman is India’s most famous serial killer believed to have committed 13 murders in Kolkata and nearly a dozen more in Mumbai city. The February 9th killer is a serial killer believed to be responsible for two deaths on February 9th of 2006 and 2008. Jack the Ripper is arguably London’s most notorious serial killer and responsible for the murder of a possible five victims. The Babysitter Killer is responsible for the murders of four children between 1976 and 1977.

Jack the Stripper is the nickname of a serial killer who was active in London and murdered only prostitutes. This unidentified serial killer is responsible for the murders of between 15-21 women. The Original Night Stalker was active in the late 1970’s and early 1980’s and is responsible for the death of 10 people. The Zodiac killer is arguably the most infamous, unidentified serial killer of all time claims to have murdered 37 people. 7 Lost Cities That Have Been Found
HAPPY NEWS : Acid Attack Survivors Open’s Up A Cafe In Agra. All Other Cities, What Are You Doing?