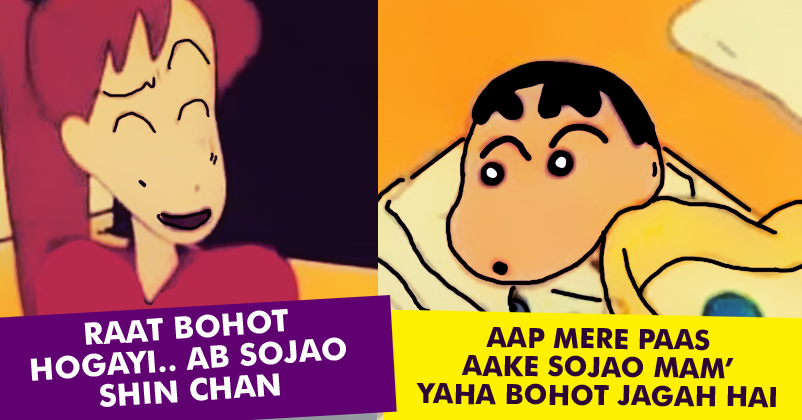 The 6 years old kid Shin-Chan Nohara who always creates havoc with people around him. Crayon Shin-Chan, a show that follows the adventures of Shin-Chan Nohara and his parents, baby sister, dog, neighbours, and friends. Shin-Chan always creates troubles for his friends and family by his silly antics. The anime is based on the manga which was written and illustrated by Yoshito Usui. It was adapted for an anime in 1992 and is still ongoing. Shin-Chan is a cute, but naughty kid. He annoys people around him by singing stupid songs or taking off his pants, and doing the elephant dance. The kid likes to woo women and is a die-hard fan of Action kamen.

Most of the humor content in the show is unnatural and weird. The use of inappropriate language and promoting mischievous behavior are some of the reasons why Shin-Chan was banned in the India. The show has been dubbed in many languages. The show aired in India in 2006, but soon the character’s behavior, attitude became a matter of controversy. As a result the show was banned in 2008 calling it a bad example for the kids. The show started airing again, after the censor board re-examined it, and heavily edited the nude scenes and profanity. All the adult jokes and scenes were either dubbed into other dialogues or were removed.

The show is a mix of dark comedy and slapstick humor, but at the end of the day it fulfills its purpose to entertain you. So today what you’re about to see is not the censored, kids-friendly content. It contains dark humor and sexual references, taken from the funanimation dub.

1. You know your flirting game is weak when you see a 5-year-old flirting better than you ever will. Shin Chan loves flirting with girls, girls who have long legs. Whenever he sees a beautiful girl, he’s ready with his pickup lines. 2. His pickup lines are one of a kind. This kid can make a career as a love guru. 3. The best excuse a kid can make when he doesn’t want to go to school. 4. Sorry Miley, but Shin Chan is the undisputed king of twerking. He invented twerking 24 years before everyone. His bum dance is hip. He’ll put all the other twerkers to shame. 5. Well that escalated quickly. Teacher, what kept you awake last night? You don’t even have a boyfriend in your life. 6. The ultimate truth of manhood. Two things that you must have to call yourself a man. 7. He’s such a flirt. Don’t underestimate the little devil. He always has some tricks up his sleeve. 8. When your girlfriend asks you what are you doing later? The trick to get away from your obsessive compulsive girlfriend. 10. A life lesson from the little kid. Happiness is the key to life.

18 Memes To Celebrate RakshaBandhan With!
9 Honest Advertisements Of Popular Brands That Will Make You Laugh Hard