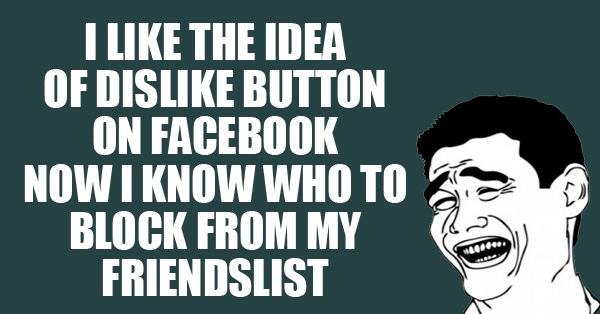 Few days back the founder of Facebook broke the news of bringing the concept of Dislike button to reality in the coming near future. Now that Facebook has heard its users requests by bringing the feature which is apparently is in beta version right now. We decided to list some uses of the Dislike button.

Here are the 10 ways in which we would be able to use Facebook’s Dislike Button:

Many people have this habit of check in through their Facebook accounts, no matter even if they are using a restroom of some luxurious hotel. Facebook’s dislike button would be great to let them know that its not cool to check-in for every place you go. It doesn’t makes sense, people tagging you in a picture of their other friends or some other thing where you are not even related to it. It makes you wonder that why in the first place I was tagged in that picture. In future, rather than un-tagging yourself from these pictures. Just use the Dislike Button and you are done. There are those few people in our friend’s list who likes to review the latest movies and giving spoilers to others who are yet to see the movie. Why is it so hard to keep your reviews to yourself and try not to spoil other’s weekend plans. A dislike button on these statuses, giving reviews and spoilers is a must.

Bidding every one Good Night or Wishing a good luck in the morning is a pleasantry exchange. But overdoing it, is just a pain in the ass. Dislike button is an option, but really government should ban these kind of status updates.

We know you are going through hard time in your life. But letting everyone know about it is just lame. Instead of sobbing and letting the whole world know. A better option is to get up and fight the odds. A dislike to motivate those people.

7. People Asking You To Like Their Pages or Links

When random people on Facebook with whom you rarely talk, ask you to like their pages or tell you to go through some link to vote for them for some competition. This definitely demands a Dislike to let them know indirectly that you are NOT INTERESTED.

8. Posts Asking For Likes and Shares

Those posts which say “Forward this post or something bad will happen in next 24 hours”. A Dislike will bring bad luck to their post. 10. A Dislike For DSLR Wannabe

Lastly, a Dislike for those DSLR junkies who are just wannabe photographers who try to click a snap of every other thing they see and upload it to their profile. Not just that, they also create a page under their name as “XYZ Photography” and asks to like their page as if they are another Mario Testino.

So, what would you use the upcoming Facebook Dislike button for. Let us know in the comments section below.

Continue Reading
You may also like...
Related Topics:10 Things We Would Be Able To Do When Facebook's Dislike Button Becomes Active, DISLIKE BuTTON, Facebook