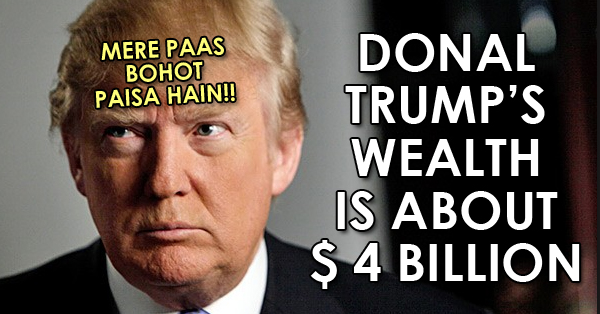 Donald John Trump aged 69, born in Queens, New York City, USA is the next presidential candidate from Republican party. He is an American Real Estate Developer and a television personality as well. He is a billionaire and the president of The Trump Organization. He has been in controversy for one or the other reason throughout his life. So we decided to compile some facts you didn’t know about Donald Trump.

Here are the 10 Things You Didn’t Know About Donald Trump:

1. He Has Filed For Bankruptcy Four Times

For someone who claims to be made of money. Trump seems to be in financial trouble quite a lot as on four different occasions he’s filed for bankruptcy because his properties were failed. First was the Taj Mahal Hotel then the Trump Plaza, in 2005 it was Trump Hotel and Casino Resort and finally Trump Entertainment Resorts file for bankruptcy in 2009. He also says “I do play with bankruptcy laws, they are too good for me”. Donald Trump once borrowed $640 million to finance the Trump Hotel and Tower in Chicago. When asked to pay it back, Trump refused and sued the bank for $3 billion. He claimed that he should only pay the loan back if his project made money. Deutsche Bank eventually dropped the lawsuit against him. 3. He Was The Face Of The “BIRTHER” Movement

The “Birther” movement came about when extremely big group of people suspected Barrack Obama of not being a legal USA citizen. Trump was one of the few celebrities who publicly endorse this movement. In his presidential bid announcement, Trump cited his own personal wealth as a major reason he should become president of USA. Forbes magazine have reported his wealth as unlikely $4 billion. But according to Donald, he is worth as much as tens of billion dollars. 5. He Was Paid $200 Million For His Show THE APPRENTICE

Donald Trump hosts the American reality show- The Apprentice. He recently sent out a press release with information about his financial gains. He revealed that NBC paid him a whopping $213 million for his 14th season tenure for The Apprentice. 6. He Is The Producer Of Miss Universe and Miss USA Beauty Pageants

Donald Trump has been the executive producer of Miss Universe and Miss USA Beauty pageants since 1996. Interestingly, recently he lost the deals for the pageants due to his controversial words spoken against Mexico during his campaign kickoff speech. According to many sources, Donald Trump has never indulged in Alcohol, he’s never smoked or taken drugs. His brother Fred died due to an alcohol addiction and it’s often thought that Fred’s struggle with booze is what inspired Donald to stay clean. 8. He Won An Award For Acting

Since, he had no major career in acting. He still won an award for one. In 1990 a film “Ghosts Can’t Do It”, Donald Trump won the coveted Razzie for worst supporting actor. Apparently, he was playing himself in the film. 9. He Has A Star On The Hollywood Walk Of Fame

Although, Donald Trump has no relation with the world of acting or cinema, he has a star on the Hollywood walk of fame. Hollywood walk of fame is stars embedded on the sidewalk (footpath), along 15 blocks in Hollywood, California. These stars are named to those people who achieved great heights in the entertainment industry. 10. Donald Trump Had His Own Board Game
The billionaire had a board game named after him “Trump The Game”. It was released in 1989 and was a cheap knockoff of monopoly.

It has been really amazing to see that Donald J Trump came this far with his presidential bid and it would be more amazing along with devastating to see Trump winning the Presidential elections set to happen next year. But until then we are sure Trump is going to make us work on his “10 new things which we didn’t know Donald Trump” list.

What are your thoughts on the topic. Let us know in the comments section below.