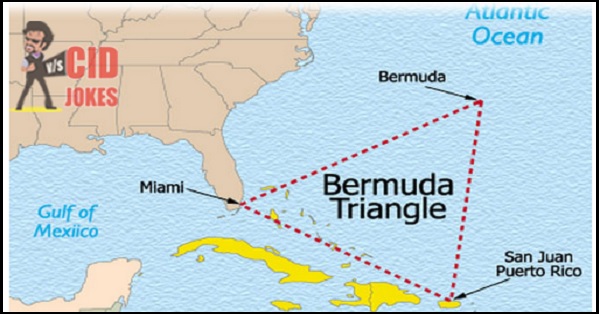 Bermuda triangle is known for making stuff from airplanes to ships disappear! The mysterious body of water is said to be cursed with supernatural powers. Whatever may be the truth, this is a crazy place for sure. Here are 10 things out of many which got ‘lost’ in the Bermuda triangle, only never to be found again.

1. This began with sudden disappearance of 5 U.S. Navy’s Torpedo Bomber’s on Dec, 1945 in a routine practice. Before the contact was lost flight leader said,”Everything looks strange, even the ocean. We are entering white water, nothing seems right.” They were never found again!

2. One of the many ghost ships of Bermuda Triangle, ‘Mary Celeste’ had many misadventures before finally getting lost in 1872.

3. Now this one’s really creepy- The Ellen Austin in 1881 came across another ship which had nobody on board. So, Ellen Austin transferred some of it’s crew to the other ship to take it to New York. The ship all of a sudden disappeared; it appeared later with the crew missing! It disappeared later, nowhere to be found.

4. USS Cyclops went missing without leaving a trace, with crew of 309. This resulted in single largest loss of life in the history of U.S. Navy.

5. Caroll A. Deering, a ship while coming from Rio de Janeiro, Brazil was found at the Diamond Shoals, North Carolina. The ship was intact, however there were crew members and were never heard again!

6. USS Scorpion, a nuclear power submarine of US went missing at the Bermuda’s triangle in 1968.

7. In 1991, the pilot of Grumman Cougar made routine radio request to increase it’s altitude(height). While it was going up, the plane gradually faded from radar and vanquished forever!

8. In 2008, a newly married couple Frank and Romin Leone went fishing in their brand new boat. They never returned. The US Coast Guard eventually gave up the search operation.

10. A Tudor markIV aircraft was about to land at Bermuda airport but was lost mysteriously shortly before landing! It was never seen again. Creepy, isn’t it? Tell us what you think about it.