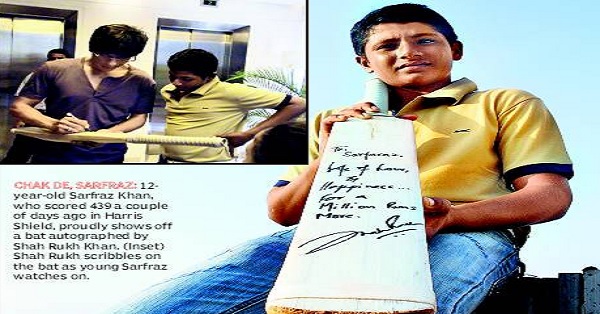 1. Sarfaraz Khan who was born on 27th October 1997 in Mumbai shares his Birthday with Sri Lankan Cricketer Kumar Sangakkara who is exactly 20 years older than Sarfaraz. 3. Naushad Khan is also training his younger son Musheer Khan. Father Naushad Khan made his children to concentrate on Cricket. And Obviously they couldn’t attend their School Regurlarly. So his father appointed a Tutor to overcome this. 4. Sarfaraz Khan is a Complete Cricketer. He bats Right Handed and He can Bowl Right Arm off break. He can even Keep the Wickets when needed. He is also capable of Bowling Medium Pace. 5. Sarfaraz Khan came into Limelight in November 2009 when he was just 12 years old by scoring 439 runs of 421 balls in a Harris Shield Match for Rizvi Springfield. However that was broken later. 8. Sarfaraz Khan scored 211 runs at a whooping  average of 70.33 in Under 19’s World Cup 2014. He was Awarded with Man of the Match Award against Pakistan where he Scored 74 runs and picked a wicket giving 10 runs in his 3 overs. He was also included in the Team of Tournament. 9. Sarfaraz Khan was once suspended by the Mumbai Cricket Association for  accusations of faking his age. However these  charges were dropped after he  passed an advanced test. 10. The Mumbai Youngster  has also faced many disciplinary issues in the past. He is said to have got into a scuffle with Kolkata Knight Riders batsman Robin Uthappa. What do you think about Sarfaraz khan. Will he be next Sachin? Share Your Views in the Comments Section Below.

Continue Reading
You may also like...
Related Topics:IPL, Sarfaraz Khan

15 Most Breathtaking Theatres In The World That You Must Visit With Your Girlfriend
12 Pics/Memes Which Relate With The life Of Every Engineering Student.