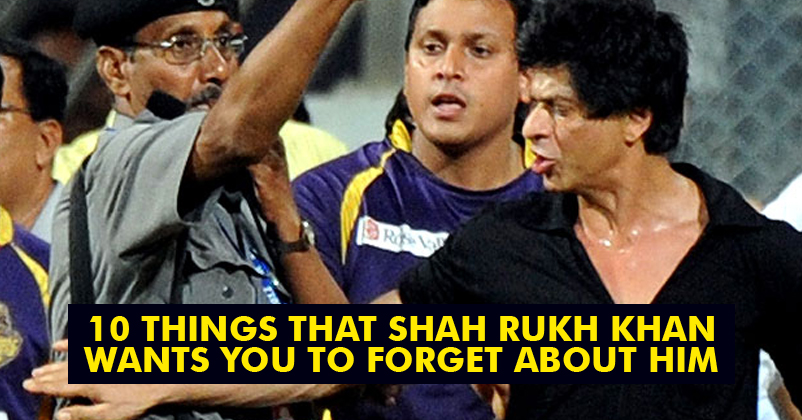 Shah Rukh Khan, he is the king of the Bollywood, he is the biggest entertainer of the decade, undoubtedly one of the greatest Indian actors of all time. Born and brought up in Delhi, he started his career with the 1989 television 1989 series Fauji. But his big break came when he starred in the 1992 hit ‘Deewana’ as a second lead along Rishi Kapoor. The film was a hit and Shah Rukh Khan won the Filmare Best Male Debut aware that year. After starring in movies like Chamatkar, Raju Ban Gaya Gentleman, it was clear that Shah Rukh Khan has an enormous potential. His display of energy and enthusiasm led many Critics to believe that he’ll be a giant star someday.

Shah Rukh Khan gained the mainstream attention for portraying the villainous roles in the two box-office hits: Darr and Bazzigar. His portrayal of an obsessive lover in Darr was widely appreciated, his iconic stammering phrase “I love you, K-k-k-Kiran” became a highlight of his career. Since then SRK has been a part of many blockbusters, hit films like ‘Dilwale Dulhania Le Jayenge’, ‘Dil To Pagal Hai’, ‘Kuch Kuch Hota Hai’, ‘Devdas’, ‘Swades’, ‘Chak De India’,‘My Name is Khan’ and a lot more.

He is the brand king, he has endorsed brands like Pepsi, Nokia, Dish TV, Videocon, Airtel, LUX, Hyundai, he is one of the highest paid Bollywood endorsers. SRK has won numerous awards and his list of achievements is never-ending. He received 14 Filmfare Awards from 30 nominations including 8 for the Best Actor category, this record is tied up with Dilip Kumar. He was awarded Padma Shri by Indian Government in 2005. The Government of France has awarded him its highest civilian honor, the Légion d’honneur.

So now let’s take a look at the 10 Things That Shah Rukh Khan Wants You To Forget About Him.

His bed scene in Maya Memsaab. The sensuous love-making scene, Deepa’s topless scenes, the nudity, the lip-to-lip kiss. Not sure how many of you remember this movie, but Shah Rukh Khan might want to forget it. The time he slapped Shirish Kunder who had criticized and made fun of Ra-One on a microblogging site. At the Sanjay Dutt’s party where SRK ignored Shirish, but Shirish was unabashedly getting on the nerves of the King Khan. When SRK’s had enough, he grabbed Shirish by the scruff of the neck, forced him to sit on the sofa, and slapped him. The ‘Joker’ director had it coming. SRK was involved in a brawl and heated altercation with a security guard and the MCA officials following an IPL game. As a result of which the MCA had banned SRK from entering the Wankhede stadium for 5 years in 2012. However the ban was lifted in 2015. In 2012 during an IPL match SRK was seen smoking inside the stadium, in front of thousands of spectators. The pictures of him smoking were broadcasted live. A Jaipur court summoned him for smoking at the stadium to which he pleaded guilty. SRK is a chain smoker, he smokes about 100 cigarettes a day. It’s something he doesn’t want his fans to do.

Everyone remembers the hits, the blockbusters, but people easily forget the flops. SRK has recorded 17 flops in his career span of 25 years. His latest movie ‘Fan’ performed below the expectations, it was a disappointment. The Indian collection of SRK starrer FAN is 85 crores. His previous movies like Happy New Year, Dilwale were heavily panned by the critics.

6. The Khan war. Battle of the megastars.

In 2008 at Katrina Kaif’s birthday party where SRK and Salman had a quarrel when SRK made inappropriate comments about Salman’s ex-girlfriend Aishwarya Rai Bachchan and in turn Salman made fun of SRK’s TV show ‘Kya Aap Pachvi Pass Se Tez Hai’. This Khan war ended in 2013 at Baba Sidiqui’s iftar party when they hugged. 7. SRK lashes out at Gavaskar! MY MONEY! MY TEAM!

In 2009 When Mr. Gavaskar, in his column for the Hindustan Times criticized John Buchanan, the coach of KKR. SRK defended his franchise coach telling Gavaskar to buy his own team to implement his ideas. SRK told the reporters, “But this is an era where Mr Gavaskar has not indulged in; nevertheless his knowledge about the game does allow him to make comments. 8. Tell me you didn’t go for the surrogate baby’s gender test ?

SRK and his wife Gauri Khan were accused of knowing the sex of their surrogate baby through the sex determination test which they conducted on the foetus. A case was filed by a NGO regarding this, the Maharashtra Government did order an investigation, however the couple were not found guilty. SRK would sure like to forget this experience. The infamous intolerance debate of 2015 which became a trending topic again when SRK shared his views on the subject. When the actor turned 50, he sparked the controversy saying there was “extreme intolerance” in the country. However he later apologized, said his words were taken out of the context, a lot of things he said were misconstrued. SRK regreted the intolerance comment because of which the screening of ‘Dilwale’ was stopped in some places, the box office collection of the movie was adversely affected. Compared to his previous TV shows like KBC, Kya Aap Paanchvi Pass Se Tez Hain? Zor Ka Jhatka: Total Wipeout performed poorly. It aired for only one season and got cancelled. It became the lowest rated show hosted by a Bollywood star. Something that SRK would like you to forget. Inspite Of Good TRPs, Here’s Why Hrithik And Akshay Refused To Promote Their Movies On Jhalak Dikhhla Ja!
First Day Collections Of ‘Kabali’ Are Out! Rajnikanth Has Beaten ‘Happy New Year’ & ‘Sultan’ Too! Its Amazing!