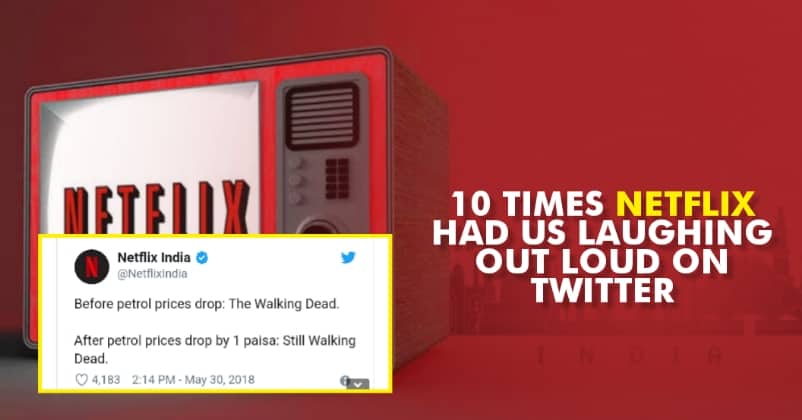 Netflix is probably the coolest online streaming website there is. Not only do they come up with the best original shows and films, but have a pretty active online presence. Kudos to the PR Team at Netflix, for keeping a tab on all their followers and actually taking the time out to reply to all the tweets.

Recently, a guy trolled Netflix on Twitter by saying, “Netflix has such a dead movie selection, no wonder half the time everyone just starts having sex instead.”

Netflix has such a dead movie selection, no wonder half the time everyone just starts having sex instead

But of course, Netflix had a solid reply in place:

yeah, sex is cool but have you ever had a tweet go viral?

Netflix India is no less savage, as a matter of fact. Remember the whole Radhika Apte fiasco and how these guys handled it? We’ve compiled a list of 10 of Netflix’s funniest posts on Twitter:

1. When Netflix’s feelings about Narcos spoilers were same as ours

2. When Netflix out-trolled Zomato for putting up a funny tweet on Radhika Apte’s omnipresence

3. When Netflix expressed what the country felt about fuel price hikes

4. When Netflix spoke our mind

5. When Netflix revealed the truth about all Goa trips

You know every Goa trip has action and adventure involved but if you have any queries/suggestions you can help us by answering the following questions-
What is mobile number?
What is your style number?

6. When Netflix took a dig at Sharma Ji ka Beta

7. When Netflix made the perfect meme we’d all been waiting for

We put quotes from the Race 3 trailer on pictures of Ma Anand Sheela and they fit perfectly. pic.twitter.com/kyhWIufHE1

8. When Netflix trolled the people who had been waiting for Deep-Veer wedding pictures

9. When Netflix knew how to convert horror into comedy

Fasten your seat belts, you're about to be ignored by your friends. pic.twitter.com/WAR6DjBB96

10. When Netflix trolled Ranbir’s many avatars on Sanju

Still no Halloween costume for tonight? Find 5 friends and go as one Sanju each. pic.twitter.com/30L1NEnQPL

We can’t help laughing our hearts out!

What Is It That You’re Seeking? Find Out In Prakash Jha And Saarika’s Powerful Short Film
Sakshi Reveals That This Cricketer Is Why She And Dhoni Are Together Today