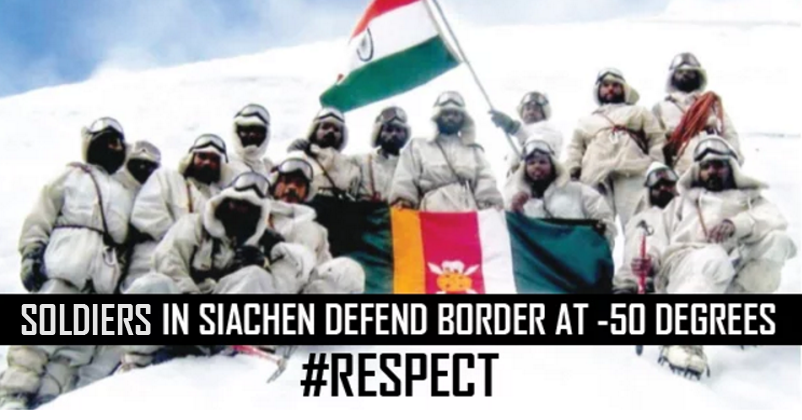 Today marks the 50th Anniversary of 1965 war fought between India and Pakistan. Well, we don’t want to create a tension between our readers as to who won the war. So, sticking to the topic we wanted you to remember these courageous Indian Soldiers who deserve a salute from every Indian. Just because of their dedication towards country we today stand as the largest democracy and one of the upcoming superpower in the world.

Here are some unbelievable facts about Indian Soldiers Defending Borders which we should be proud of.

1. You must remember the Battle Of Longewaala. Well, it was fought between 120 Indian Soldiers and 2000 Pakistani soldiers, with India having just 1 jeep mounted M40 rifles destroying Pakistan’s 45 tanks. 2. While in others government sectors Reservation is applicable, Indian Soldiers are explicitly recruited on the basis of their knowledge, strength and abilities. There is no sort of reservation in Indian Army. 3. Indian Soldiers have proved to the best as they guard the highest mountain ranges warfare in the world. 4. They control the highest battlefield in the world which is Siachen, situated at about 5,500 meters (18000 ft) above the sea level. 5. The Kargil War between Indian and Pakistan in 1999, which India won courageously was fought on the highest altitude battle field in the world. 8. The Baily Bridge built by Indian Army between Dras and Suru rivers in Himalayan ranges in the Ladakh Valley is the highest altitute bridge (at an altitude of 5,602 meters) built ever in the human history. 10. When Uttarakhand was hit by flood catastrophe in 2013, Operation Rahat was started by Indian Defense Forces to evacuate the affected. More than 20,000 people were evacuated by both Indian Amry and Indian Air Force and is considered to be the biggest civilian rescue operation in the world. WE SHOULD BE THANKFUL TO INDIAN SOLDIERS WHO GUARD THE BORDERS FOR US DAY AND NIGHT.

Don’t forget to drop your thoughts in the comments section below.

11 Unknown Facts About The Most Qualified PM Of India – Dr. Manmohan Singh
20 Freedom Fighters Who Proved They Fought As One Nation, Beyond Religion