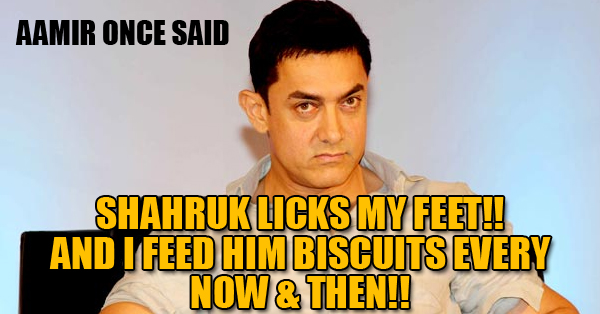 Aamir Khan’s full name is Mohammed Aamir Hussain Khan and he was born on 14th March, 1965. So he is going to be 51 next year but doesn’t he still look like a 40 year old man? Aamir Khan was first featured in this Nasir Hussain directed and Dharmendra and Zeenat Aman acted “Yaadon Ki Baarat” which was released in 1973. Aamir Khan’s first film in a lead role was “Holi” which was directed by “Film And Television Institute Of India (FTII)” pass out Ketan Mehta and the film got released in 1984. Aamir Khan married Reena Dutta in 1986, had two children with her and later in 2002, they got divorced. Aamir later married Kiran Rao in 2005 and they now have a son. Aamir Khan hates bathing as much as you do. This one is confirmed news, no jokes here. I support you Aamir on this one. 😛 He has put on this much weight for his upcoming film, Dangal. Hats off for this much dedication to a film. Aamir Khan and flop actor? Aamir Khan had nearly 10 flops after Qayamat Se Qayamat Tak with “Dil” being the only exception. Andaz Apna Apna was a flop too. Before you jump on to any conclusion, Shah Rukh is the name of his dog. Aamir said, “Shah Rukh is licking my feet and I’m feeding him biscuits every now and then” and this statement created quite a stir back in 2008. But Shah Rukh is Shah Rukh and said, “I also think I am also may be stressing somebody out.” Good fight. 😀 I hope you know Aamir a little bit better now. Do share your views in the comments below.

Continue Reading
You may also like...
Related Topics:10 Unknown Facts About Aamir Khan That Everyone Should Know, AAMIR FACTS, Aamir Khan, SRK

Remember Chak De India’s Haryanvi Girl Komal Chautala? She Can Beat Any Bollywood Actress Now
11 Lesser Known Facts About Famous Inventors You Did Not Know About