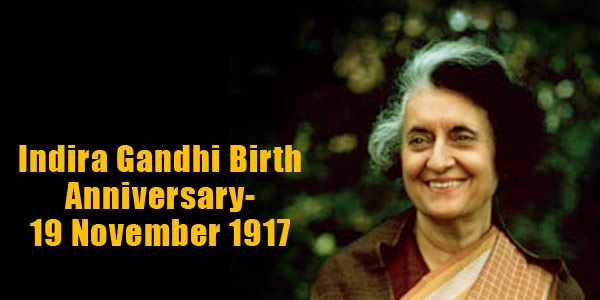 Politics flows in the veins of the Gandhi clan, and their blood is smeared with history of India. And, today is the birthday of one such hard-mantle PRIME MINISTER of INDIA. Indira Gandhi, the second minister to keep the designation intact. Today, let’s dig out some unknown facts.

We all know that she was the first Prime Minister, but here are few things which we didn’t know.

2. Indira Gandhi went to Oxford but was driven out from there for her non-performance, Also she was then admitted to Shantiniketan University but, Guru Dev Rabindranath Tagore chased her out for bad conduct.

Eeeh, now that doesn’t sound like she was a good student. 3. Indira changed her religion from Hindu to Muslim, and re-named herself as Maimuna Begum. She did all these to marry Feroze Khan and everybody in her family was against this matrimony. 4. So, that their family political identity is not jeopardize. Her father asked the pair to change their surname, and also when they returned to India, they performed a mock Vedic marriage. 5. Her son, Rajiv & Sanjiv (yes, that’s Sanjiv). The name was changed after Sanjiv was arrested by British
Police on the ground of car theft and confiscated his passport. But under the influence of Indira Gandhi, the then Indian Ambassador to UK, Krishna Menon changed his name to Sanjay and procured a new one

6. As per reports, Sanjay Gandhi was not the son of Indira & Feroze, but was born out of Indira and another Muslim gentlemen – Mhmd. Yunus. But what the truth is might be a mystery. 7. The biggest achievement of Indira Gandhi as a Prime Minister, was bringing in a reform called The Green Revolution that transformed India into a country self-sufficient in food grains. 8. Prior to becoming the most popular Prime Minister, Indira Gandhi was holding the office of Minister of Information and Broadcasting under Lal Bahadur Shastri. 9. Indira Gandhi was assassinated by two of her trusted bodyguard, who eventually took a revenge on her seeking retribution for the events at the Golden Temple.

10. Also as per reports, when the news of Sanjay Gandhi’s death reached Indira Gandhi, her first question was “Where are his keys and his wrist watch?”. Some deep secrets about the Nehru-Gandhi dynasty seems to be hidden in those objects. It is rumored that Indira was responsible for the death for her and had actually planned the plane crash. Some rumors just refuse to die 95% People Fail To Answer This QUESTION Correctly. If You Can, You Are A GENIUS
Sandhya’s Devar, Mohit, Killed In “Diya Aur Baati Hum”