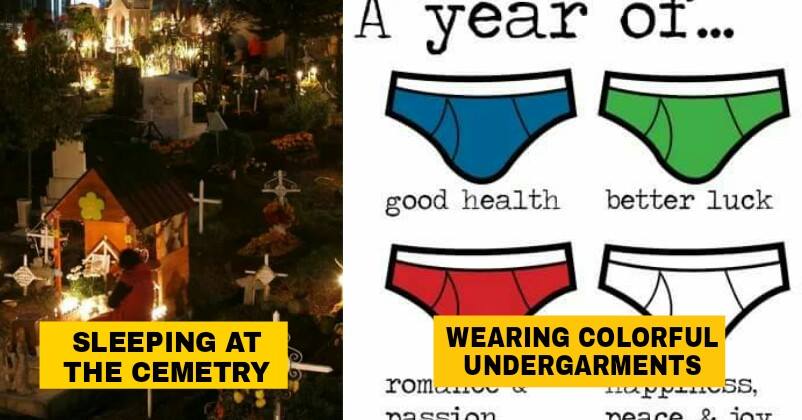 Everyone of us wish to have a better year every time we are about to start a new one. We make resolutions, follow a few rituals and do almost anything which makes us believe that a change of calendar would change our fortune. There are a few though who have left others behind in a bid to get a better fortune with the coming year. Here is a list of ten such weirdly hillarious, at times scary or sweet traditions people follow in hope of a better year. In Ireland, there is a tradition of banging on doors and walls of the house with Christmas Bread. They do so to drive out any bad luck or evil spirit. Bread is also chosen to ensure that the ones living in the house have enough bread in the coming year. In Ecuador, It is beleived that burning a scarecrow dummy burns all the evil done in the past 12 months. The scarecrow also scares away the bad luck that is expected to haunt the coming new year. Every family creates their own dummy and burn a separate one. In some South American countries, it is beleived that the colour of your underwear would determine the fate of your coming year. A white underwear means you’ll have a peaceful year, a red one will give you love, a golden one wealth and so on. A fight to settle all your greivances! As simple as that. The Takanakuy Festival of Peru is a traditional fist fighting festival wherein the ones having a dispute fight with each other and leave all their problems behind to enter the new year with a clean feel for everyone. This is by far one of the craziest tradition you would ever come across. If you want to wish someone a happy new year, you are supposed to hurl dishes at that person’s front door. The more dishes you break, the more loyal is your friendship. Funny that!

Celebrants in spain have a different way of snatching some good luck for the new year. As the clock strikes midnight, they eat a grape for each of the twelve chimes. They also make a wish with every gulp of a grape.

7. Sleeping At The Cemetery (Chile) In Chile, people visit a cemetery and spend their new year’s eve with their deceased loved ones. The cemetery is turned into a perfect party house with some beautiful lighting and a bit of classical music. The cemetery is usually open for public by 11pm. Is there any better way of welcoming new year than having some extra meal? People in Estonia welcome their new year by eating seven times on new year’s day. They believe by doing so they’ll have an abundant year ahead. People(well trained divers) in Siberia cut a hole in the lake and jump in it while holding a tree. The divers leave the tree under the frozen lake and emerge out soon. The tradition takes place at Lake Baikal, the world’s deepest lake! Lets end this list with a sweeeet one. In Bolivia, coins are hidden inside baked sweets. Whoever finds the coins has good luck on his side for the coming year.

There are many such interesting or rather weird traditions which people follow to welcome their new year. Do share your views if you know about more such traditions.

These Hotels In Mumbai Do Not Have 13th Floor & The Reason Is Very Strange!
Amazing Scientific Discoveries By Ancient Indian Saints That Will Make You Proud