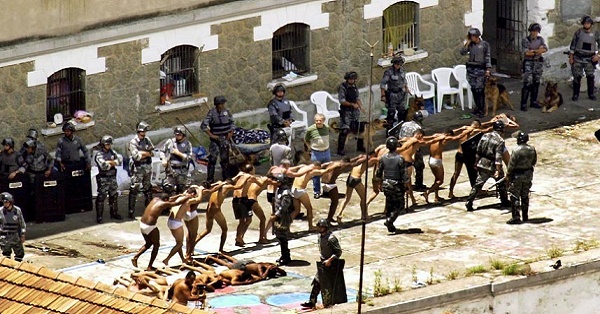 You will be amazed to know the brutality and torture these prisons opt towards prisoners. They are not only the worst prisons in the world but can also be resembled as the worst places on land. These prisons have extremely entrenched pattern for violence which will give you a mind race that this path can even be worst than hell.

Guards are instructed not to treat prisoners as human being and they are permitted to kill any prisoner at any time. Bio weapons like anthrax bombs are tested on these prisoners and currently there are 50,000 prisoners out of which 25000 prisoners died of starvation. This is the most violent and deadly prison ever built where prisoners are sexually harassed to an extent which was hopeful closed down in 2002. Sexual assault was so bad that out of five, one prisoner was diagnosed with aids. This is one of the most sadistic prisons ever known where guards have brutal methods to torture prisoners. They used to burn them with cigarettes and many prisoners attempted suicide out of this torture. They had a rule of four men per square yard and they had to sleep in this overcrowded situation. The condition was so worst that they had to eat each other for food and the current number of prisoners is7000. Tadmor Military Prison is one of the most oppressive prisons in the list due to the strict actions taken here. Guards here are instructed to cut their hands with axes, hang them with rope and drag them to the death. Most of the prisoners staying here are only because of participation in anti government protest. This is the most overcrowded prison in the world where some prisoners have been died due to suffocating in their sleep as there are many being packed into one room. Beating and brutality from the guards is common culture here. Repeated sexual assault is common culture inside this prison. 519 prisoners were killed in 2012 because of not getting medical aid. Worst prison in America and a place for worst. The prisoners have to spend 23hours in a cell made from poured concrete where no natural lights reach.

Beating and cruelty towards prisoners is the common culture of this prison. For the first three months the inmate’s are harassed to death. Iron shackles are welded on the legs of prisoners and they get water after every alternate day. Meal is also served once in a day.