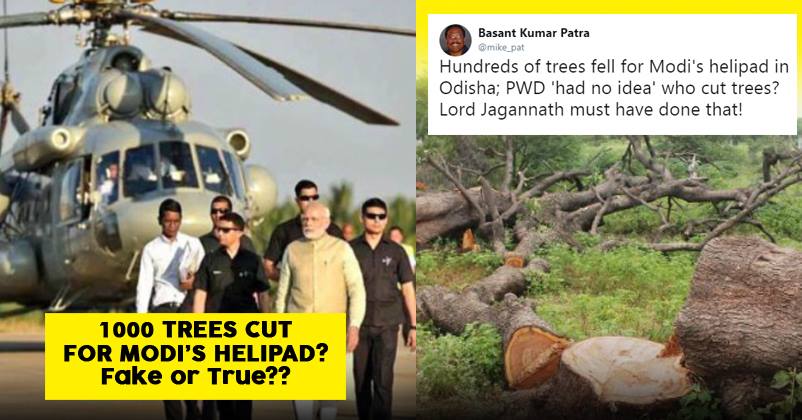 Apparently, deforestation is clearly not on Modi’s mind as more than a thousand trees have been cut down in Odisha in order to make way for construction of his helipad.

Our Prime Minister is planning to visit the town named Balangir in Odisha, and thus a temporary helipad was deemed necessary for his arrival.

The plot is approximately 2.25 hectares, and is controlled by the Indian Railways. However, a vacant land was required for construction purposes and 1.25 hectares of land was cleared.

However, according to environmentalists, this is an appalling move and the Modi government did not even bother to ask for permission.

Netizens are furious. Check out the comments received:

Propaganda : Hundreds of Trees Cut to Make Helipad Space for Modi’s Odisha Tour, UN must take back Champions of The Earth Award from Modi

Reality : Only Shrubs and few saplings have been removed 😭 pic.twitter.com/kLRuBfDPnY

Over 1,000 trees cut in Odisha for a helipad for the upcoming visit of PM Modi. So what?

….Trees were cut for landing modi's Helicopter in odisha

Will ppl accept rahul as Next PM?

Hundreds of trees fell for Modi's helipad in Odisha; PWD 'had no idea' who cut trees?
Lord Jagannath must have done that!

Apparently over 1,000 trees were cut in Odisha for a helipad for the upcoming visit of PM Modi, the person who was honoured with highest environmental honour 'Champions of the earth'. How ironic. @giri1478 @roy_eat @p7eiades

For PM Modi's one hour meeting 2000 trees cut down to make a helipad in Balangir, Odisha.

@narendramodi @dpradhanbjp @sambitswaraj
Dear PM sir, I found news that 3500 tree cut down for your bolangir(odisha)rally for helipad. Dis z nt acceptable. I am gr8 fan and huge supporter of MODI and BJP. But this z not acptble. You should ask for immediate plantation dist admin