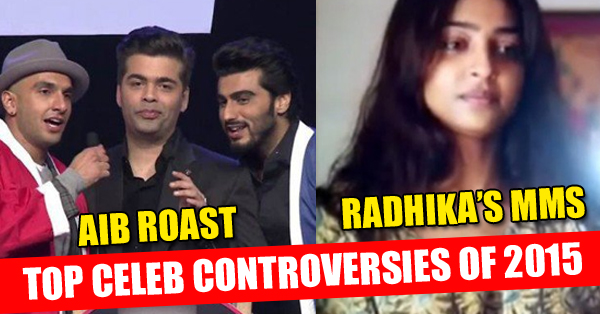 Bollywood and Controversies are always good friends, 2015 was no different to this. Bollywood celebs were involved  in some of the Political, Social controversies which made the headlines of every news channel in the country. Starting from Anushka Sharma to the 3 Khan’s of Bollywood were in the list of controversy makers of this year. Here is quick recap of the famous controversies from the Bollywood celebs.

11 Controversies which stormed the country’s headlines..!!

Even though AIB Roast took place in December of 2014, it sparked a controversy when the video was uploaded to Youtube in January 2015 which featured AIB Team,Arjun Kapoor, Ranveer Singh, Karan Johar, Roadies Raghu and others. Police complaints were lodged against the 2 Bollywood actors and Karan Johar. Later AIB withdrawn the video from youtube and issued an apology. Anushka Sharma who is in relationship with India’s Test Captain Virat Kohli was blamed largely by Indian Cricket fans on Social media after India lost to Australia in the semi final of Cricket World Cup 2015. It continued every time India or Kohli performed poorly until Kohli spoke up that it was very bad targeting the personal life of a sports person. Aishwarya Rai Bachchan was also involved in a controversy this year. She did a print ad campaign for Kalyan Jewellers which showed a slave child holding an umbrella for the actress,this raked the controversy. Many reacted to this as it was ‘Racist & Offensive’. Later it was known that actress Aishwarya had a solo shoot but later the campaign was changed by the creative team. 4. Sanjay Dutt Getting Parole after Parole

Sanjay Dutt who is currently in Yerwada jail serving his sentence since 2013 has been out of the jail on Parole for almost 5 Months due to various reasons. Citing this there were allegations that he was experiencing a Special Treatment in the Jail. He is expected to be released in 2016. 5. Ameesha Patel Trolled for NOT standing up during the National Anthem Kushal Tandon, Bigg Boss season 7 contestant accused Ameesha Patel for disrespecting and not standing up during the National Anthem while it was being played before a film screening in PVR. Ameesha defended herself by a series of tweets, that she was under going ‘girly’ problems. After the 2 minutes noodles was banned by Food Safety & Standards Authority of India. A case was lodged by a lawyer from Uttar Pradesh against Amitabh Bachchan, Preity Zinta & Madhuri Dixit who were the brand ambassadors of Maggi. This made the headlines while there was nothing wrong from the actors.

Aamir Khan sparked a huge debate across the country when he said, his wife Kiran Rao asked him if they should leave the country due to insecurity. This led to biggest uproar of the country as the actor was criticised in every possible way. Later Aamir issued a statement regarding the huge uproar. Salman Khan was acquitted of all charges in the hit and run case which took place 13 years back. People who praised law after the charges against Bhai made fun of it on social media after the superstar was left free. Radhika found herself in a scandal not just once but twice. First there a nude pic being circulated on her name later a video was leaked which had bold scene from Anurag Kashyap’s short film which was made only for International market. Actress denied the pictures with a tweet. CBI filed a charge against Sooraj Pancholi after investigating him in the Jiah Khan’s suicide mystery. He was also arrested in 2013 June who spent 23 days in jail before getting the bail. Which controversy was over hyped? Share your views in the comments section below.