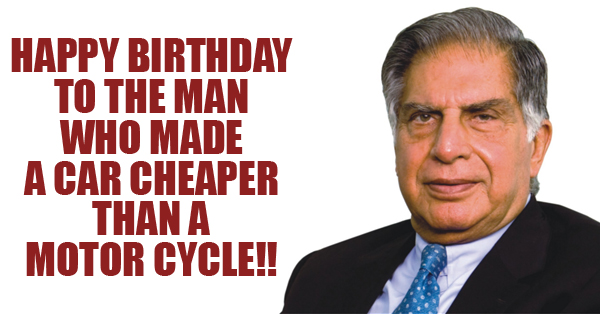 Who is not aware about Ratan Tata? He is one of the best known businessmen and a true patriot. The personality of Ratan Tata projects a true entrepreneur and also gives us an insight about the person, who is willing to work all his life for the betterment of society. What makes the claim even stronger is the fact that he just doesn’t talk about social betterment but actually implements initiatives to make a difference.

Here are few facts about him on the occasion of his birthday.

Born into a wealthy and famous family of Mumbai, he is the great grandson of founder of the Tata Group, Jamsetji Tata.

2. His parents separated when he was seven years old He was raised by his grandmother as his parents were separated when he was just seven years old.

3. From his childhood he was interested in the cars 4. He graduated with a management degree from Harvard Business School in 1975 6.Even he was humiliated once Ratan Tata and his team faced “humiliation” when they went to sell the group’s fledgling car business to Ford in 1999. Nine years after the ‘humiliation’, the clock turned a full circle and the salt-to-software conglomerate humbled the mighty Ford by taking over the American giant’s marquee brands Jaguar and Land Rover.

7. He was criticised by many on being the chairman of Tata Group He worked day and night to bring Tata up to a height having various Tetley, Jaguar, Land Rover, Corus, etc.

8. He gave a high growth rate to the conglomerate Under Ratan Tata’s tenure, the group saw an explosive growth with revenue growing ten-fold to $100 billion in the year ending in March 2012.

9. He made the car cheaper than a motorcycle

Tata Nano is the cheapest car in the world worth Rs. 1 lakh only.

10. He has a number of awards to his name He won were ‘Padma Bhushan’ in 2000 and ‘Padma Vibhushan’ in 2008. Ratan Tata was also honoured in Economic Education as the 26th Robert S. Hatfield Fellow. This is the most prestigious and highest award given by Cornell University.

11. A patriot by action and not just by words Few months after 26/11, Taj Group of Hotels owned by TATAs launched their biggest tender ever for remodelling of all of their hotels in India and abroad. Some of the companies who applied for the tender were also of Pakistan. To make their bid stronger, two big industrialists from Pakistan visited Bombay House (Head Office of Tata) in Mumbai without an appointment to meet with Ratan Tata since he was not giving them any prior appointment. They were made to sit at the reception of Bombay House and after a few hours a message was conveyed to them that Ratan Tata is busy and cannot meet anyone without an appointment. Frustrated, these two Paki industrialists went to Delhi and through their high commission met up with a minister. The minister immediately called up Ratan Tata requesting him to meet the two Paki industrialists and consider their tender ‘Enthusiastically’. Ratan Tata Replied, “You could be shameless, I am not” and put the phone down.
In other such incident after few months when the Pakistani Government placed an order of Tata Sumo’s to be imported into Pakistan, Ratan Tata refused to ship a single vehicle to that country. This is the respect and love for motherland that Ratan Tata has.

Wishing Ratan Tata a very Happy Birthday. Do share your views in comments below.

Continue Reading
You may also like...
Related Topics:Ratan Tata, Tata

Did You Know ATM PIN Originally Meant To Be 6 Digit Long?
10 Facts About Dhirubhai Ambani On His Birthday