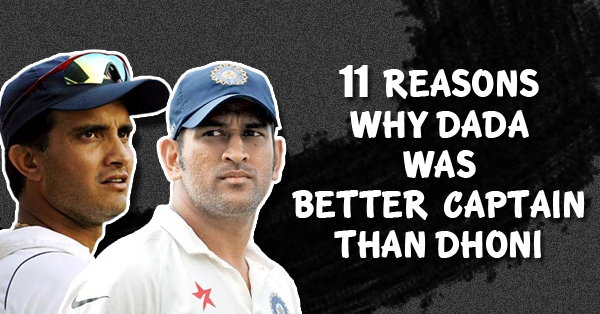 One is the most aggressive captain Indian had ever had. Other is the coolest captain who never showed any feelings or emotions on winning or losing. Dhoni on one side is the Captain of the Best Cricket Team whereas Sourav Ganguly was the best Captain who built up the Best cricket team in the Cricketing world. It was he who hand picked cricketing stars who later on played a dominant role in India’s Success in all forms of cricket. While Dhoni managed the team in an efficient manner which resulted in making Indian Cricket Team as the best team among all other teams.
But the question is who led Team India better? Who took up the responsibility in a better way? There had always been a discussion over who was a better captain? Here we bring you one side of the coin. We present to you these 10 points on why we feel Sourav Ganguly was better when it came to captaincy and team management. But given the way we approach Cricket, I would go ahead with Dada. For showing all of us that we can take on the world, be aggressive, dominate oppositions, and get into the habit of winning, and more importantly even losing with a fight.

Share your views & Comments on the article in the comments area below.