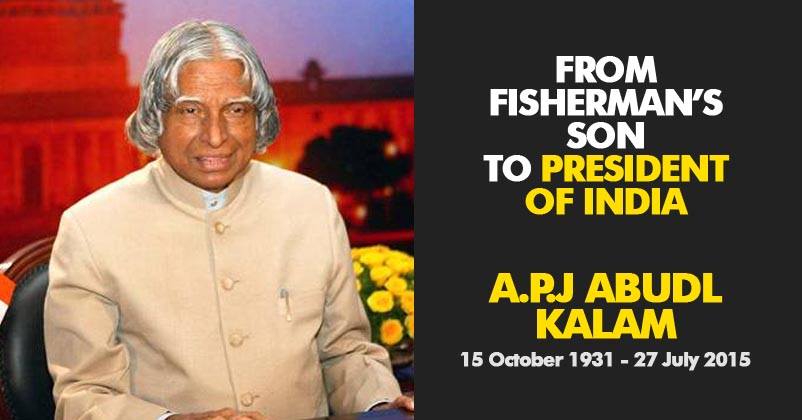 Former President, scientist & a great treasure to India is no more, but we still remember each and everything about him.

APJ Abdul Kalam was an inspiration to millions. He served as the 11th President of India from 2002-2007 after which he became a visiting professor and was invited by universities across the nation and the world. He was the most loved politician in India. From a common man born in a small village of Rameshwaram to becoming the powerful man of the aation, his life was truly an inspiration.

Although he received criticism often, no one can deny his talent and smartness. The whole nation was shocked when he passed away; of course, we had lost a precious pearl.

Here we piled up 12 important phases of his life where he had achieved something which is a dream to a millions even now. Go through these 12 achievements and you will surely feel proud. Apart from these APJ Abdul Kalam was Padma Bhushan in 1981 and Padma Vibhushan in 1990. He was also awarded the highest award in India, the Bharat Ratna for his immense contribution to the field of science. His recent awards include Doctor of Laws by Simon Fraser University and Doctorate of Science by Edinburg University-UK. Have a look at other achievements & awards he retained in the recent past: MAY HIS SOUL REST IN PEACE!!

High Court Puts Restriction On Crackers In Punjab. People Can Burst Only Between 6.30 To 9.30
Global Hunger Index: India Ranks 100 Among 119 Countries, Down 45 Positions Since 2014