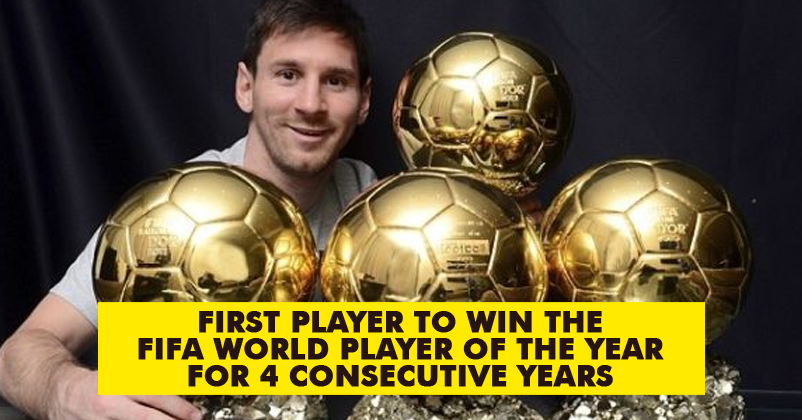 Lionel Messi is one of the greatest football players that the world has ever seen. The player has already claimed the legend title and rules millions of hearts. Today we are here with 12 facts about him that you probably don’t know. Read the complete article to know a bit more about your favourite footballer. Messi started playing football at the age of five and was soon recognised as an extremely talented player but, was diagnosed with growth hormone deficiency when he was 11. Little Leo was so much into the game, that even then, all he cared about was “Will it stop me from playing football”. His parents were unable to pay for all his treatments. Even then, he never let that stop him; once he was noticed by Barcelona, he was offered to pay for his treatments.

2. Youngest player to be nominated for FIFA World Player of the Year 3. First player to win the FIFA World Player of the year For 4 consecutive years. As mentioned earlier, he bagged the prestigious title four times consecutively from 2009 to 2012. He has definitely climbed a lot in a short time. We wish to see him achieve more in his life.

4. Most hat-tricks in official competitions for Barcelona. Till now, Messi is the highest hat-trick scorer for Barcelona, with 37 Hat-tricks in official games. He also holds the record for Barcelona’s top scorer in European competitions. Barcelona’s then general secretary, Charly Rexach, was so impressed with what he saw from a 13-year-old Messi. He signed him within seven minutes of his trial; he needed to sign him up fast. Apparently, the only thing near, that he could write on was a napkin, with both sides signed right on the spot. It’s probably the most valuable napkin in the entire sports history.

7. Signed up his son Thiago when was just 72 Hours old. No more than three days after he was born, Messi’s son Thiago was already a prime target for big clubs. Newell’s Old Boys, Messi’s original club, was first in line and managed to sign the infant. However, it was just as a supporter’s club contract because he was just 72 hours old. It was Messi’s father who negotiated the contract as a supporters club, so Thiago can at least take comfort in the fact that his parents aren’t exploiting him. Messi is a die hard food fan and his love for food is pretty well known among his fans. According to a report, his club management had to remove the vending machine from the dressing room because of Messi. He is often seen hanging out and enjoying at restaurants and always eats to his full content. Messi will get married to Antonella Roccuzzo who is also his childhood friend, on 30th of June 2017. Messi knew her from the age of five and are a great couple. The surprising thing is that Messi and Antonella aren’t married but have 2 kids Thiago Messi and Mateo Messi. Messi is a great person on and off the field; he works for social welfare with many organisations. He is also the brand ambassador for UNICEF and has helped many children to find a home.

11. Messi holds the record for highest number of goals in a single year. In 2012, Messi scored 91 goals which is the highest by any football player in a single year.

12. His first match lasted for less than a minute. Messi was red carded for elbowing within 48 seconds of his career’s first match. Surprisingly, this was the only time he ever received a red card in his entire career.

This were the 12 lesser facts about Lionel Messi. Did you like them or did we miss any facts? Do let us know in the comments section below.

95% Of The People Fail In Guessing Her Age! We Bet You Can’t Win This Challenge!
This Designer Was Slammed For Pairing A Hijab With Saree! His Reply To Haters Is Pure Gold