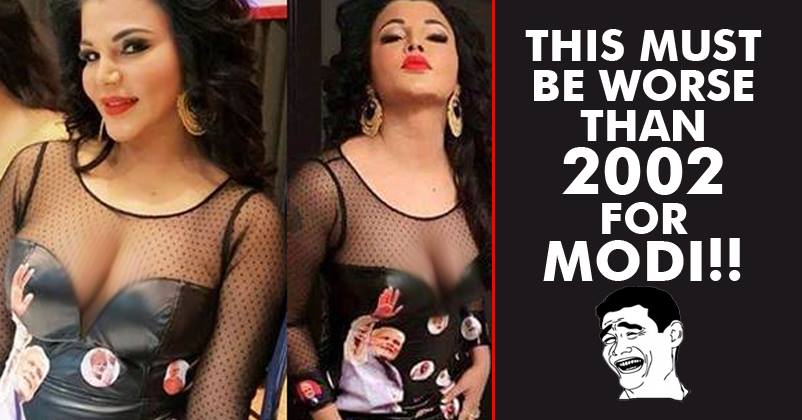 Recently, Rakhi Sawant did something which no one would ever forget! Yes, she wore a dress which had pictures of PM Modi all over it and that too at inappropriate places. Apart from seeking the attention of media, this cheap publicity stunt of hers’ might have caught the attention of Kejriwal too, isn’t it? After all Kejriwal doesn’t leave a single chance to take a dig at Modiji.

Social media was filled with criticism and trolls after seeing this dress. Finally, Rakhi Sawant broke her silence and explained the reason why she wore this dress. Rakhi said she had sought permission of PM Modi and special members of BJP before wearing the dress. She adds, “Every Indian has a right on their Prime Minister. In America, women wear a two piece of their flag so I don’t think I have done anything wrong”

Have a look at some of our funny memes in this regards, which would make you go ROFL! Here they are.. This costume was too bad to digest. Hope nobody else faces such embarrassment like Modi would have faced after watching this costume. Leave your views & comments in the Comments section below & tell us what you think about this Costume.

25 Chandler Bing’s One-Liners That Prove He Is The God Of Sarcasm
10 Facts That You Must Know About ACP Pradyuman!