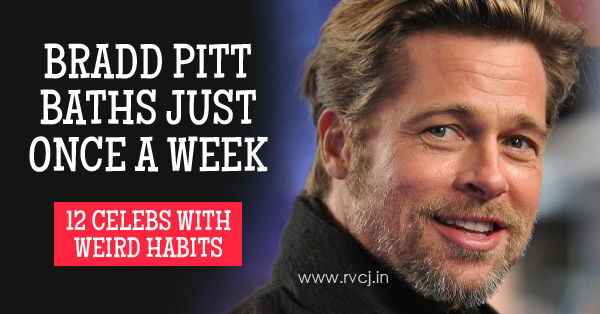 Like us even celebrities have some really awkward and embarrassing situation when they are stuck to their bad old weird habits.Some even loose their calm and also fire out their hospitality guy out of the room or place where they are … Why ? It’s just because they don’t want to expose their weird silly habits to the media or any other person other than his or her own staff. This Bengali beauty is a chain smoker. Every morning she wakes up, the first thing she needs is to smoke. Hope now being a mother she has controlled her habit. Eminem sleeps only in a complete dark room. If he is in some hotel room,he makes sure that the room is completely blacked out. Shahid Kapoor is addicted to coffee. He is so much addicted that he drinks atleast 8-10 cups of coffee daily. Barack Obama is said to have received the night owl presidency award because he usually loves to work past 2 AM. Sometimes he also skips his work in the day time just because he wants it to be done in the night time. Jessica Simpson doesn’t brushes her teeth daily. It is said that she skips brushing and rather prefers to have Breakfast directly in the morning. Sushmita Sen loves to bath in an open terrace. Just imagine if she lives in the building which has high rise towers in the neighborhood ? Shah Rukh Khan removes his shoes only once in a day. Be it in hotel or any functions or in his own house itself. He says he loves to be fully dressed always. Many people keep biting and chewing their nails when they are nervous. Virendra Sehwag is one of them. Brad Pitt baths only once in a Week. According to the sources , Simon Cowell loves to climb trees. It is said that it is a kind of ritual for him that he does it everyday. Like Virender Sehwag, Britney Spears too is a Nail Biter. She continuously keeps biting her nail when she is idle.

Do you have any weird habit? Share in comments section below.