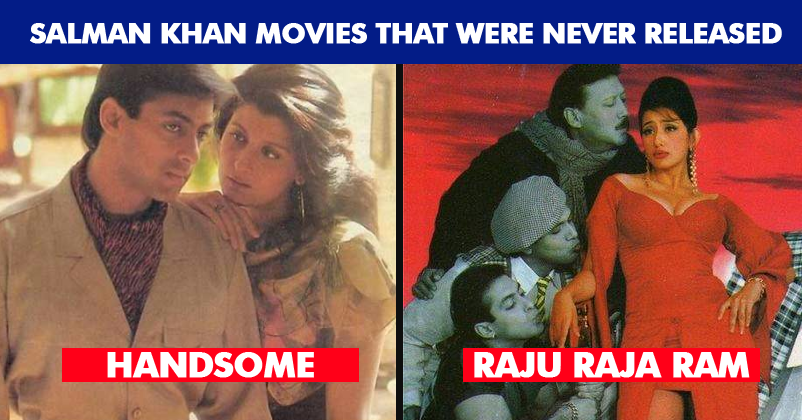 Whenever there is an announcement of Salman Khan’s movie, we surely go super crazy about it. People adore him for the innocence he portrays in his movies. But there are some Salman Khan movies that were all set to be released or were half shot but for some reasons, they never saw daylight. Today we are here with a list of 12 such movies. Read the complete article to know about them.

This movie was all set to be shot but was later stalled due to unforeseen circumstances. The casting for the movie included Vidya Bharti and Karishma Kapoor. A song was recorded for the movie namely ‘Aye Mere Dost, Dosti Ki Kasam’, but was later used for another Salman Khan movie Majhdar. More than half of the movie was already shot before the production was stalled for unknown reasons. Salman was shooting the movie with Somi Ali in the opposite role whom he was dating back then. This movie was supposed to be directed by Sohail Khan and was all set to be his first directorial debut but was stalled due to production issues. The movie was almost half completed before it was shelved permanently. The casting included Salman Khan, Anil Kapoor and Pooja Bhatt. The shoot for the movie was planned in 1991 and starred Salman Khan, Sunny Deol and Meenakshi Sheshadri. Rajkumar Santoshi was brought on board as the director but he pulled off immediately after the first shoot schedule. Santoshi signed up for another movie and replaced Shekhar Kapoor as the director of Bobby Deol’s movie, Barsaat. Therefore, the movie was stalled and was never continued. After Dil Hai Tumhara, Salman signed for Gherao to make up for the loss. Rajkumar Santoshi came back as director for the movie yet again. But this time the movie wasn’t even able to complete its first shoot. After multiple delays for shooting date, the movie was shelved forever. The movie starred Manisha Koirala as the lead actress. The announcement for the movie Handsome was made along with the casting. But it never got a schedule for shooting and was cancelled. The movie was set up to be starred by Salman Khan and Sangeeta Bijlani. After the success of No Entry, a sequel of the movie was planned and was to be directed by Anees Bazmee. The script of the movie was ready and Salman Was supposed to play a double role. It stayed for a long time in news reports. However, it never happened in reality due to unknown reasons. The film starred Salman, Govinda and Jackie Shroff, and David Dhawan was brought on board as the director of the movie. But soon the production unit started facing financial issues and the project was cancelled. After his success in Judwaa, he was signed up for another double role flick with Anees Bazmi as the director. But later Salman called off the project as he felt that doing two double role movies back to back might affect his career. The movie Ran Kshetra starred the popular duo of Salman Khan and Bhagyashree from Maine Pyaar Kiya. This movie created a lot of buzz among the fans but Bhagyashree got married and the film got stalled. Ultimately, it was shelved. This movie was supposed to be an action flick. Director Ketan Dhawan signed up Salman Khan, Sanjay Dutt and Arman Kohli for the movie but later decided to do a family movie instead. Thus the movie was called off and was never shot. This was the list of 12 Salman Khan movies that were never released. Do let us know if any of these seems interesting to you in the comments section below.

Legal Case Filed Against SRK! He’s Going To Be Booked For A Horrific Incident
These Big Bollywood Stars Didn’t Complete Their Education! Really???