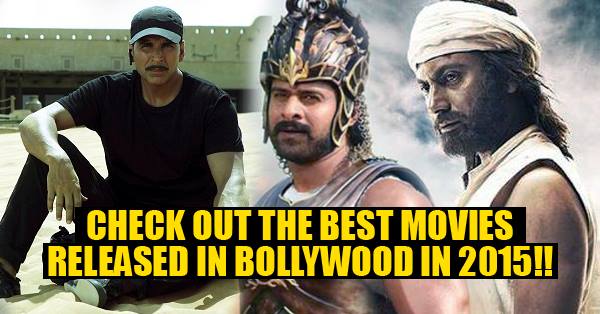 It was just when we got used to writing 2015 in the date section, the year came to an end, the last week of the year, last few days, last few hours are just passing away.

What an eventful year it was! And being a movie buff, how can we forget the amazing movies we saw this year. Some of the best of them were: Released on 23rd January, just few days to when the Nation was to celebrate Republic Day, was an amazing display of the courage & love for the Nation undercover officers live with. Released on 10th July, S.S Rajamouli’s Baahubali is the most expensive movie ever produced in the Indian subcontinent. Released on 16th October, the movie was an amazing pun on the state of the guys in a relationship. Sequel to huge success Tanu Weds Manu, this movie was released on 22nd May and liked by the people all over the nation. 17th Jul released, this movie was an extra-ordinary depiction of humanity, going beyond boundaries. Talvar was based on 2008 Noida double-murder mystery case of Aarushi Talwar & Hemraj. Released on 19th May, was well received by the critics & international audiences as the Film festivals This movie is a true inspiration, how a common man can change the course entire village, all on the basis of his determination & hard work. Was released in 1st May, based on the one of the biggest problems of the nation – corruption, featuring Akshay Kumar as Gabbar himself. 13. Margarita With A Straw

Very sensitive movie, which got appreciated by limited audience. It was released on 1st September.

Do let us know which one was your favorite..

Continue Reading
You may also like...
Related Topics:best movies, best movies of 2015, bollywood

13 Amazing Dialogues From Bajirao Mastani Which Will Win Your Heart!!
When Priyanka Chopra Slapped A Fan….