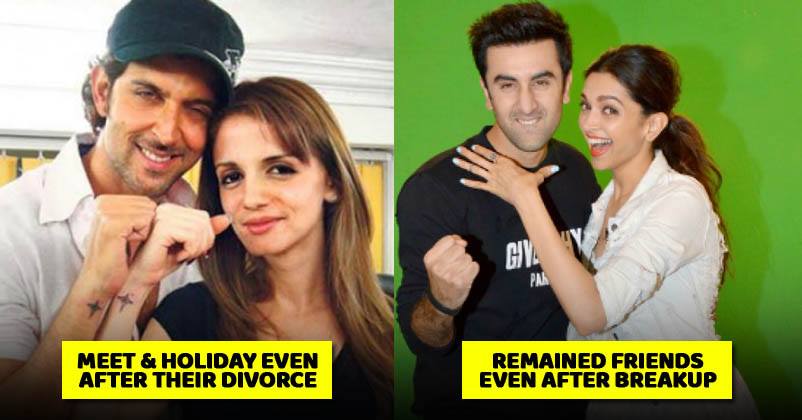 When actors work together, it becomes easy for them to fall in love. Their surrounding brings them closer but sometimes they fail to live together.

Even after getting married, a few couples find it impossible to take their relationship further. Once they parted away, the question started pointing them- would they remain friends or not? However, there are a few ex-couples who remain friends even after their break up.

Here are a few celebs who are giving major friendship goals post-breakup:

Anurag Kashyap and Kalki Koechlin remained in marriage only for four years. Even after their separation, they were spotted chilling together and are still sharing a cordial bond. Once Anurag said:

“Yes, we’re in touch. We are still good friends. I’m very happy for her. A lot of people did not give the credit that was due to her. They said she was getting everything because of Anurag. But you can’t live your life by what people say. People have no other business except passing comments on others.”

A post shared by Fashion Central Official (@fashioncentral.official) on Jan 22, 2016 at 3:56am PST

The duo called it quits suddenly on April 24, last year after being in a marriage for 16 years. Also, Adhuna has fallen in love again for Dino Moreo’s brother Nicole. Farhan and Adhuna released a joint statement of their separation:

“This is to announce that we, Adhuna and Farhan, have mutually and amicably decided to separate. Our children remain our priority and it is immensely important to us, as responsible parents, that they are protected from unwarranted speculation and public glare. We sincerely request that we are given the privacy that is required at this time to move forward in a dignified manner.”

Malaika and Arbaaz were a power couple in Bollywood. They ended their marriage of 18-years. After taking divorce with Arbaaz, Malaika had said:

“Arbaaz is a part of my family, the father of my child. Certain equations don’t change overnight. The things that happened should remain between us. It’s personal. We don’t have to prove anything to anybody. Meeting (Arbaaz Khan) makes my son happy, and that makes me happy.”

They were also a power couple of B-town but when they announced separation, no one could believe. Hrithik and Sussanne were together for 17 years with two kids. But, in 2014, they ended their marriage. However, they share a cordial relationship and have each other’s back.

Bips and Dino started dating each other when they were modelling. But, something went wrong between them and they said goodbye to their relation. But, it was their friendship that he attended Bipasha’s wedding and said:

Akshay is known to date many beauties before he finally got hitched to Twinkle. His affair with Shilpa was the talk of the town. But, he cheated on her and she broke up. However, they are good friends today and once Shilpa had said:

“I share a cordial friendship with Akshay Kumar now, and I’d like it to remain that way. There’s no animosity between us.”

During the shooting of Kaminey, they came closer to each other. However, they neither denied nor accepted their relationship in public but their closeness said it all. After break up, they remain cordial and are on talking terms.

Ranbir Kapoor is dating Alia Bhatt and has confirmed it lately. Before seeing Alia, the actor was in serious relationship with Deepika Padukone and then with Katrina Kaif. However, they broke up. But, Bunny and Naina are still friends. Once Ranbir said:

“Deepika and I will remain friends for a very long time. I will be her children’s godfather; I will play with them and all of that. We have that kind of relationship.”

Ex-Bigg Boss contestants Gauhar Khan and Kushal Tandon’s love story started in the show and called off after it. However, things didn’t go well between Kushal and Gauhar and they parted away. Their breakup proved an ugly one in the tinsel town. But, they are now good friends.

Salman Khan introduced Katrina Kaif in Bollywood and fell in love with each other. The duo dated for five years but, couldn’t take their relationship longer. After parted away, they worked in films like Ek Tha Tiger and Tiger Zinda Hai. Once Kat said:

“Personally do I think Salman’s advice has been important (for me)? Yes, I think it’s been invaluable. Having Salman and his circle to give me advice was definitely very useful and very important.”

Anushka Sharma stepped in Bollywood opposite Shahrukh Khan but, she marked her presence after appearing in Band Baaja Baaraat with Ranveer Singh. Since then, they started dating each other but their relationship didn’t last for long as well. After break up, Ranveer had said:

“I have great affection for her brother and her parents and she will always be a special person for me. It was great to reunite with her. I am really really happy with all the success she has been seeing lately and I am her genuine well-wisher.”

Kareena Kapoor and Shahid Kapoor had been in a relationship for five years before they broke up. Later, they worked in the film Udta Punjab and are currently on good terms. While talking about Shahid’s marriage, Kareena had said:

“Both of us were performing at a Femina event. We chatted. So, he actually told me about him getting married before he told the media. I’m very happy for him. He’s doing very well professionally… I haven’t seen Haider yet, but my sister saw it and loved it. And I can vouch for marriage is cool. I’d just like to wish him well.”

So, you can take lessons from these celebrities for moving forward on better things in lives. Relationships never meant for forever but, friendship does.

Sara Ali Khan Gives A Royal Ignore To The Old Female Beggar. People Called Her Shameless
10 Upcoming TV Shows Which Will Keep You Hooked To The Television