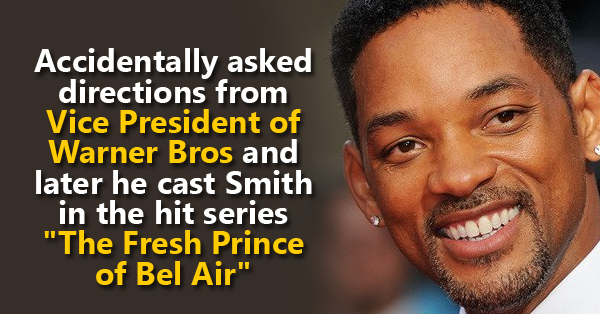 Many of us dream about a good career and thereby a great life. But have you ever felt that there are some people who started their career accidentally & gained popularity and fame all over the world? YES, there are people who look for opportunities and sometimes opportunities find people.

Here let us take a look at those Celebrities who started their career by Accident.

Smith was a well-known rapper before debuting into acting. He asked directions from a random person in parking area who was the Vice President of Warner Bros , and later he cast Smith in the hit series “The Fresh Prince of Bel Air”. Pratt didn’t even have a place to live and he adjusted in his car itself when he got a ticket to Hawaii from one of his friends. Before coming to Hawaii, Pratt has worked for many odd jobs. One director noticed him when he was bartending and offered him a role in his movie. In this way, Chris entered Hollywood and gained stardom. At the age of 10, she was approached by a model scout who wanted her to be a part of Revlon ad. Mel was involved in a drunken brawl at a bar before he drove his friend the other day to a movie audition. After looking at Mel’s face all beaten up, the director invited him to do acting at the spot.

Guess what, Mel Gibson got a role for Mad Max. When Jennifer was on a New York vacation, she was approached by an agent to pose for a photograph. She did it and after that, she regularly received calls from many agents and earned herself a role in “Winter’s Bone ” Lilly was approached by an agent on the streets of Kelowna. Initially, she rejected it but was later convinced when she got to know that huge money can be made in the industry. A Military photographer clicked her photo for a military magazine when she worked in an ammunition factory. The photographer also pointed that she has the caliber to become a star with her looks. And she later made it possible. Theron went to a bank to cash a cheque and the cashier refused to do that. She was angry and was making a scene out of it which impressed a Hollywood agent present there. He handed her his business card and a new star is born. Depp accompanied a friend for a horror movie auditioning. The movie director spotted him and asked to read a few lines from the script. He nailed it and grabbed a leading role right there itself. Ford was a skilled carpenter. One day he made cabinets for George Lucas who gave him a movie role. Ellen who was working as a bartender was spotted by a scout and asked her to be a part of L’Oreal advert campaign. Tatum was noticed by a model scout while he was roaming the streets of Miami. Scout asked him to pose for famous brands and Tatum ended up being a part of Pepsi & Vogue. After his college days, Diesel struggled a lot and made a documentary film about a struggling actor and it was ended up screening at Cannes. Steven Spielberg was impressed with that and offered a role in his film Saving Private Ryan.

Wait for your turn because you never know when does opportunity knock your door with a Business card.

Dont Miss Out Virat’s Crazy Moves At Rohit Sharma’s Sangeet! You Are Gonna Love It!
You Can’t Miss To Read What Dhoni Said About Drought’s Effect On IPL In Maharashtra