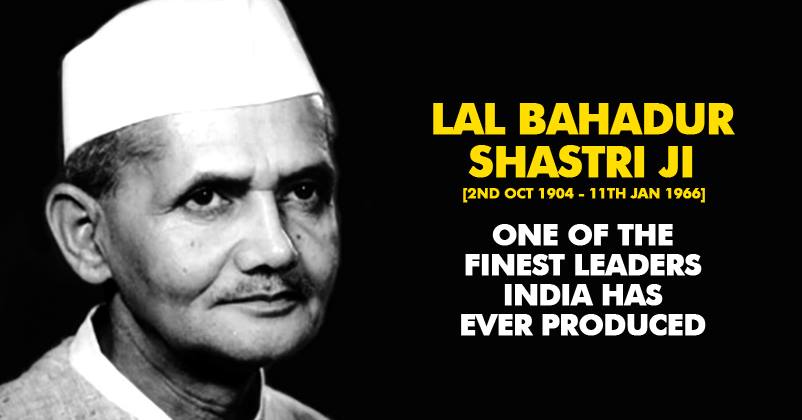 A great legend Shri. Lal Bahadur Shastri coincidentally shares his birthday with Mahatma Gandhi. He was a great patriot and quick to accept and give solutions with examples for short comings in the nation he so loved. When he became PM there was shortage of food. He advised the people to fast for a day to save food. He did not only preach but also followed the same. Here are few such mind blowing facts about the prime minister ‘who made no money’ 1. Was against caste system Lal Bahadur Shastri was born on October 2, 1904, to Ramdulari Devi and Sharada Prasad Shrivastava, in Mughalsarai, United Province (Uttar Pradesh). Lal Bahadur was against the prevailing caste system and therefore decided to drop his surname. The title “Shastri” was given after the completion of his graduation at Kashi Vidyapeeth, Varanasi in 1925. The title “Shastri” refers to a “scholar” or a person, adept in the ‘Holy Scriptures’. In English ‘Hail the Soldier, Hail the Farmer’ was a slogan given to India by the Prime Minister of India Lal Bahadur Shastri in 1965. He was against dowry it was seen by the fact that he rejects dowry in his marriage itself with Lalita Devi.

4. Left the Indians in deep grief with a debatable question of conspiracy Lal Bahadur Shashtri died due to cardiac arrest under suspicious circumstances in Tashkent giving rise to reports of a deep-rooted conspiracy.

5. He devoted his life for the pride and honour of the country Shastri was regarded as man of principles, and it can be seen from the fact that he had offered his resignation as Union Railway Minister, hours after he was made aware of a train accident that killed around 150 people.

Lal Bahdaur Shastri’s leadership was hailed across the globe when he led India to victory in the Indo-Pak war of 1965. He laid the foundation stones of the well-productive schemes like Green Revolutions and White Revolutions.

8. A man of great intellect He spent his time reading foreign authors like Marx, Russell and Lenin. In 1915, a speech of Mahatma Gandhi changed the course of his life and decided to jump into the fire of Indian freedom struggle.

He played a crucial role during the ‘Salt Movement’. Lal Bahadur led a door-to-door campaign urging people not to pay land revenue and taxes to the British authority. He was also sent to jail for a long span of nine years for leading the campaign.

He is the only Indian Prime Minister to have died in office overseas. Lal Bahadur Shastri was the first person to be posthumously awarded the Bharat Ratna (India’s highest civilian award).

11. Several institutions and areas were named after him

12. Vijay Ghat was made in his memory 13. A national tournament of nation game in memory of the nation hero All India Lal Bahadur Shastri Hockey Tournament is held every year since 1991 and is a major tournament in the field of Hockey.

Share and wish him a very happy birthday, do leave your comments on and tell us what you think about him.