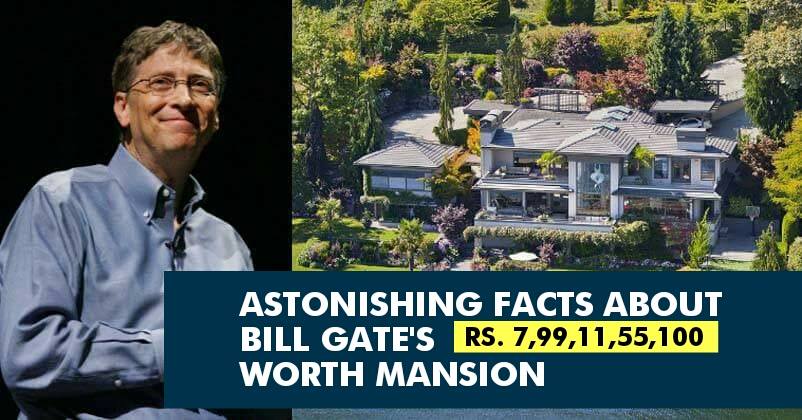 Money can’t buy happiness! That’s true. But’s it’s better to be sad in a bungalow than a room size house. And when you are Bill Gates you have hell lot of scope and possibilities of pleasure. Being an owner of $82.2 billion (529,647,48,00,000.00 INR), Bill Gates has always made us wonder about the use of this much money.

Well, you won’t repeat the question once you know the details and wonderful facts related to his super luxurious house. We don’t guarantee about the shock though. Let’s have a look- 2. Xanadu 2.0 is an ‘earth-sheltered’ house and uses its natural surroundings to avoid heat loss and regulate temperature more efficiently. 4. The 60-feet pool in its own separate 3900-square-feet building has an underwater music system. People in the pool can swim under a glass wall to come up to a terrace area on the outside. There’s also a locker room with four showers and two baths. 5. There’s a trampoline room with a 20-feet ceiling. The exercise facilities take total 2500 square feet and also include a sauna, steam room, and separate men’s and women’s locker rooms. 6. The house has 24 lavish bathrooms, 10 of which are full baths. Isn’t that awesome? 7. An enormous library houses a manuscript for which Bill Gates paid more than $30m (193,29,24,000.00). The 2,100-square-foot library has a dome roof and two secret bookcases, including one that reveals a hidden bar. On the ceiling, you’ll find a quote from “The Great Gatsby” that reads-

“He had come a long way to this blue lawn, and his dream must have seemed so close that he could hardly fail to grasp it.” 8. There are several different garages at different points around the property and can accommodate up to 23 cars. The most interesting one, however, is an underground cave made out of concrete and stainless steel. That garage alone can park 10 cars. Some of the concrete was purposely broken to give it a rough, “deconstructivist” look. 9. Bill Gates has a favourite tree that is monitored electronically 24 hours a day. He reportedly became fond of a 40-year-old maple tree that grew close to the home’s driveway. It’s monitored by computer, and if at any point it becomes too dry, water is automatically pumped into it. 11. The sand on Gates’ beach is imported from the Caribbean. The lakefront shore contains sand that’s delivered in large quantities by a barge from St. Lucia each year. 12. Microsoft holds an auction every year, where employees donate products and services to be bid on. The money goes to the company’s charitable fund. Bill Gates has donated private tours of Xanadu 2.0 in the past. According to the Puget Sound Business Journal, a Microsoft employee once had the tour for $35000(22,55,078.00 INR). Now, what can be said about this? Bill Gates is among the wealthiest persons worldwide who will soon become a trillionaire. Wonder what will he add to this extra luxurious house in future.

Continue Reading
You may also like...
Related Topics:Bill Gates

Guy Followed This Woman In Broad Daylight! She Exposed The Jerk In The Most Unique Way On Facebook!
What CEO Of Amazon Tweeted About India After Meeting PM Modi Will Make All Indians Proud!