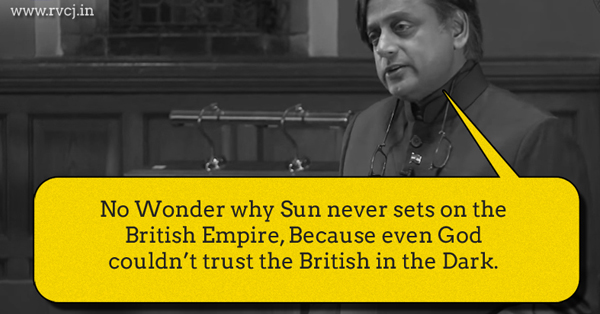 Recent debate in Oxford over British Colonization went viral all over the social media & the reason for the debate getting viral and watched by over a million people is Indian National Congress’s senior leader Shashi Tharoor, who not only brilliantly argued on the topic but also managed to prove to the speakers & guests sitting there and the world that Britain Owes Reparations for exploiting India for 200 years.
Tharoor’s speech was appreciated not only by dignities in the hall but also when went viral on internet was appreciated by the viewers from around the world. Shashi Tharoor in his speech gathered some of the hard hitting facts on British Colonization. The facts were so true that it led all the people sitting in the hall cheer and applaud for him.
Watch the video here to know what he spoke:

Check out below given 13 images which contains few hard hitting points from his speech which completely nailed the British Empire.