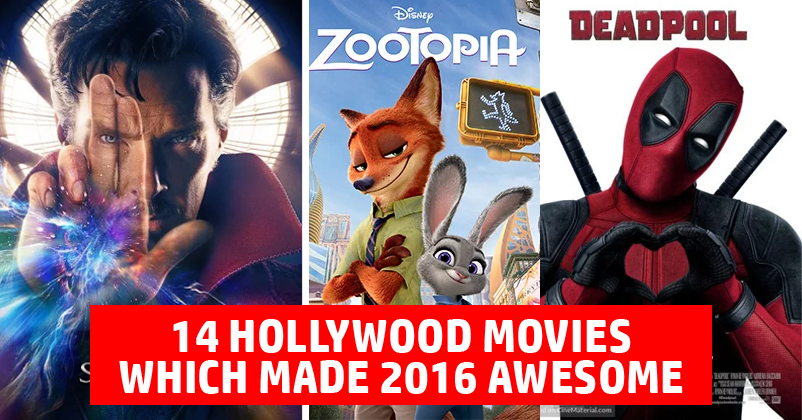 Hollywood movies are loved and accepted all across the globe. In India, they surely do a plenty of good business. 2016 has been an amazing year for the Hollywood Industry. The epic realistic action scenes, excellent direction and 100% efforts put in by various artists in the movie, makes it worth watching.

So here we are listing out some of the amazing Hollywood movies that were released in the year 2016. Have a look at them.

It’s a love story of an aspiring actress and a dedicated Jazz musician who struggles hard to meet their ends while pursuing their dreams in a city that is best known for destroying people’s hope and their dreams. A movie where a professor takes her chance to communicate with the newly arrived Aliens in their UFOs so as to stop a global war. Her technique and emotions plays a beautiful blend to uncover the mystery. It’s a humorous and witty story about a two guys trying to solve a case of a missing girl which makes them unearth the involvement of highest circle of powers of the white collared society. A movie that can also be tagged as a mini Avengers movie. An epic movie where ego, honor and priorities of every single avenger clashes with someone else that leads to a war. It’s a movie where a bunch of bad guys do something really good for the world. All the villains of the D.C world come together to fight against someone who was much worse than them.

A movie that revolves around the life of a bullied fat kid who after 15 years turns out to be a fit CIA agent. He, then along with the most popular guy in his college days (who is now an accountant) fights against the organization by decoding their corrupt money transactions. It’s a story about how a successful professional doctor lost his control over his hand due to an accident and then with the help of mystical arts tries to regain his focus to work again. In the midst of learning, he saves the entire world against the evil dark powers who tries to destroy it. It’s an animation movie where a Panda (Po) fights against a bull (Kai) in a Kung Fu Style. Kai defeats every single kung fu master across china and then it was Po who was expected to defeat Kai with the special technique which his ancestors used to know but not now. Another animated movie from Disney where a rabbit gets selected in the police force where he quickly learns that how difficult it is to maintain law and order in the city fo Zootopia where all animals live in peace and harmony. He is later joined by a fox who work together to solve a mystery case.

10. The Legend Of Tarzan It’s a story about the efforts that a man who was previously born and raised in jungle puts in so as to save his wife and his family from the exterior threats of the world. It’s a typical cowboy movie where a bunch of 7 outlaws (Assasins, gamblers etc) are hired by the people of the town to protect themselves against the evil Industrialist to always happens to destroy their lives.

12. Fantastic Beasts And Where To Find Them A movie that revolves around a magician with a magic case who happens to loose it through which various creatures come out in the real world. Out of them, few tries to bring damage to the real world. The most wittiest and the deadliest movie of the year. A story about a superhero who tries to save his girlfriend from the claws of the villain who made his life miserable. Deadpool is a mentally unstable with a quick outburst of emotions like anger, frustration and much more. It’s a comedy movie where 4 women try to save the New York city from the growing paranormal activity with help of amazing gizmos and their witty jokes.

So these were some of the movies that we feel deserved to be on this top list of 2016. We might have missed some gems. Now the work is up to you by writing down the names of the movies that you think is worth coming into this list.

Dangal Creates A New History On Its 5th Day! It Seems The Movie Will Break All Possible Records!
DANGAL – 6th Day Collections Are Unbelievable! The Movie Is Going ‘Dhakad’ On Box-Office