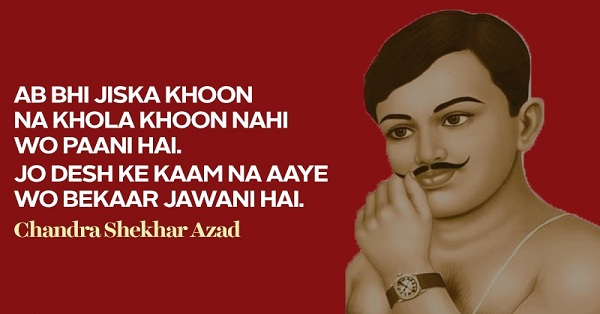 India’s freedom struggle has not been easy. It took sacrifice of many freedom fighters who laid down their lives in the path of getting the motherland free. Yes true freedom is never free of cost and needs sacrifice and lives. Our great freedom fighters put themselves apt to be the best examples to the said line.
Have they got justice of what they did? Have we forgotten them? Has the government neglected the heroes?

It is a lucid fact that in India Mahatma Gandhi and Nehru have always been given more importance. Not they did not do anything, their work towards the nation has been great but Government seems to have forgotten that there were many other revolutionaries which took India to the doorstep of freedom and had shook the British Raj right to the roots. Though the list is very long we bring to you a list of 14 such freedom fighters who did not get that respect from the Government of free India as much as they deserved. He was born on September 16, 1904. He was a student of DAV, Kanpur. He had requested his father to cancel the marriage as he wanted to serve the nation. He died on May 17, 1933 at Andaman Cellular Jail while he was on an indefinite hunger strike. Born on July 23, 1906 he was a terror for the British. Good at skills of impersonation he was difficult to recognise. He died on February 27, 1931 by shooting himself when only one bullet was left while fighting the British at Alfred Park, Allahabad. He was born in October 27, 1904. He was an expert in making bombs and had trained Bhagat Singh and many other members of the party to make bombs. He died while on September 13, 1929 in Lahore Borstal Jail after 63 days of indefinite hunger strike. Born on May 15, 1907 he was very strong headed. He was an active member of the Indian Revolution Movement. He was closely associated with Bhagat Singh in all his activities. He died on March 23, 1931 when he was hanged at Lahore Central Jail along with Rajguru and Bhagat Singh. Born on January 23, 1897 he was enough to terrorise the British just by his name. He is known among people as ‘netaji’. Initially he was a part of Congress but on rifts with Gandhi he set up the Indian National Army. A very famous quote from one of his speeches is, “तुम मुझे खून दो, मै तुम्हें आज़ादी दूँगा|” The date and nature of his death is very controversial since declaration of his death itself. He presumably died on August 18, 1945 in a plane crash at Taihoku Prefecture. Born on October 22, 1900 he told the British about the secular and strong India and Indian people. He executed the Kakori train robbery with utmost perfection. He died on December 19, 1927 when he was hanged to death. When his chains were released, he reached for the hanging rope and kissed it by saying these words, “My hands are not soiled with the murder of man. The charges framed against me are a bare false. Allah will give me the justice.” He was born on March 21, 1905. He was a part of the Quit India Movement and he is a notable freedom fighter of the north east India. He died on June 15, 1943 by hanging till death. He was the last martyr who was hanged in the last phase of Quit India Movement. He is said to have said that he was proud to sacrifice his life for the country just before he was hanged. Born on February 14, 1909 she was known as ‘The Jhansi Rani of Travancore’. During a rally when police ordered to shoot at a mass of over 20000 people she valiantly cried, “I am the leader; shoot at me first before you kill others.” Her courageous words forced the police authorities to withdraw their orders. She died on May 5, 1982. Born on November 20, 1750 he was the coffin filler for the British and the first missile man. Commonly known as Tiger of Mysore he had deployed a platoon carrying rockets. He died on May 4, 1799 while fighting the British. Born on November 19, 1828 she told the British the power of an infuriated Indian woman. She took an active part in the uprising of 1857 and reined havoc on the British. A famous line for her is, “Khoob ladi mardaani wo to Jhansi waali rani thi.” She died on June 18, 1858 while fighting the British. Do share this and remind people of them. Leave your views in comments below.