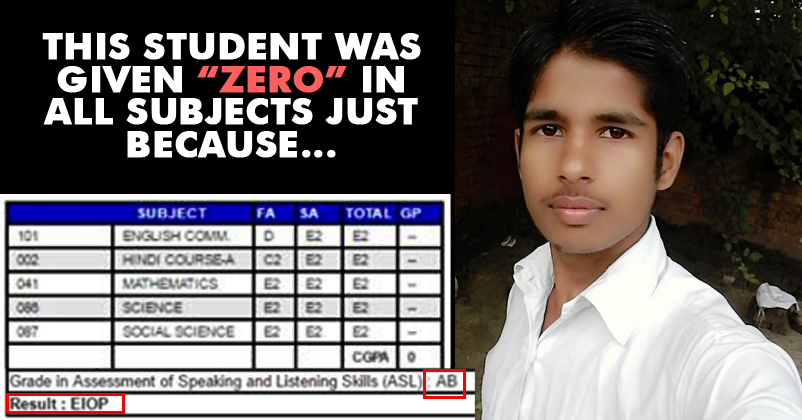 We all know how much corrupted a system can be. But despite everything around us, educational institutions are expected to be clean. Sadly, the truth is that most of them are turning into money-making machines. They don’t even seem to care about the careers of the students to fulfill their quest to make more money. A similar incident happened with Avanish Yadav. Read the complete article to know about it.

Avanish is a student of the Children Senior Secondary School, Belaisa, Azamgarh, Uttar Pradesh. His father is a farmer and a humanitarian organisation provides assistance to children of poor farmers, but to avail the facility they need to provide a fee receipt for the entire year. But when he asked for a fee receipt, the school kicked him out and later intentionally failed him in the board exam.

This is what Avanish said,

“My father, a farmer by profession, is involved with a humanitarian organisation that provides financial assistance for the education of the children of poor farmers. It is essential for those availing the benefit to present an official fee receipt from the school for the entire year.”

The school authorities claimed that Avanish’s father had misbehaved while demanding for the fee receipt. This incident took place on 9th August, 2016.

Filled with grief, Avanish wrote to PM Narendra Modi and Uttar Pradesh CM Yogi Adityanath regarding the issue, but he didn’t get any response. Luckily, the National Commission for Protection of Children’s Rights (NCPCR) came to his rescue.

The commission instructed CBSE to issue an admit card for Avanish and stated that a TC cannot be issued to a candidate if his/her parents misbehave inside the school premises. In response to the instructions of the NCPCR, CBSE asked the school authorities to take back the TC and issue him an admit for him to appear in the final examination. The school promised to do the same.

Unfortunately, the school decided to take revenge on their own way. Although the school allowed Avanish to appear in the examination, his marksheet showed zero grade on 3rd June 2017 and the mark columns were blank against every subject.

Here’s is the screenshot of his marksheet. Here’s the English translation of what he wrote.

Today my class 10th result is out, I was a student of Children Senior Secondary School, Belaisa, Azamgarh. The school authorities kicked me out because I made a felony by asking a Fee Statement. A big organisation NCPCR backed me and I got back in my school, CBSE allotted me a admit card to sit in the board examinations and I wrote all the exams, but when my result was declared, my total grade point is zero. I have lost this long battle. What a country and system. Watch my result yourselves. #CBSEResults2017. 70******25.

When he contacted his exam centre, they said that they didn’t send his mark to CBSE as his internal assessment mark was not provided by the school. He than called his principal S C Patnaik and asked him about it. Shockingly the principal shamelessly agreed that they didn’t send his marks to CBSE intentionally and asked Avanish to wait another year and write his exams again. Here’s is the English translation,

What shall I say to you. Today I went to St. Xavier’s School, which was my exam centre. I saw my attendance copy there. The principal of St. Xavier’s didn’t give me a copy of the sheets due to legal reasons, but he assured he will show them again if required. He also said that, if the school doesn’t send the internal marks then board doesn’t upload the marks even if he has appeared in the exams. I spoke with my Children School’s principal S C Patnayak Sir (73******78) on phone and he clearly said that he didn’t send the marks. He said, ‘What will you do? Go and study class 10th again’ and he hung up. End of story.

Certainly Avanish has experienced life in a harsh way at a very tender age. But we are happy that he is not giving up on this so easily. He has decided that he will fight against it and will do everything he can in order to see justice done.

This certainly shouldn’t be the message to the young generation. We must work together to eliminate such malpractices from society. We from RVCJ wish him all the best for his journey for justice.

Do let us know about your thoughts on this. Do you think it was appropriate for the school authorities to do such an act?