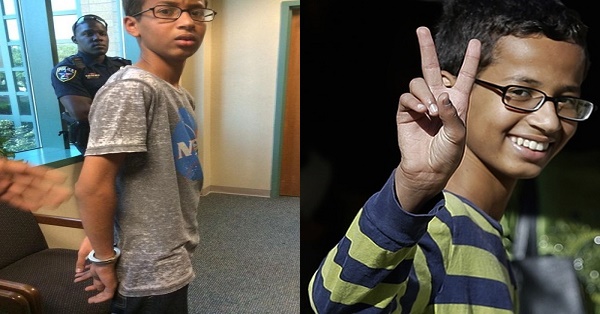 The 14-year US Muslim Ahmed Mohamed who had been taken into custody in view of the made that his homemade digital clock looked like a bomb has acquired the attention and interest of few renowned personalities like President Obama, Mark Zuckerberg and Hillary Rodham Clinton together with the whole world.

It so happened that the teenager got suspended, arrested and handcuffed on Monday when he had been accused of making a “fake bomb” by school authorities. There is no denying the fact that since he is a Muslim by religion, questions arose whether the boy had to face this all owing to his religion which made him an object of suspicion since he did nothing wrong but just made a digital clock. Nothing can be hidden from the powerful eyes of social media and this matter too got highlighted over the Internet and many renowned personalities like Obama and Mark Zuckerberg came forward in his support. Not only this, he was also appreciated by a number of recognized agencies like NASA plus social media site Twitter etc. Now after getting world-wide response in his favor combined with praise and criticism on the part of the school, the teenage boy had made a decision of not going back to that school where he had been looked with suspicion and where teachers got him detained and handcuffed for doing nothing wrong but just showing his skills. He now looks for some other school, as per reports of CNN.

He may be enrolled in a private school or might as well consider the option of home schooling, as the incident has hurt his family a lot and that too when he was just making an attempt to impress his teachers but true, this case has snatched innocence from him. What adds to it is his being a Muslim plus a guy having brown skin not white which makes it more a case of suspicion on account of religion and color.

Massachusetts Institute of Technology’s astrophysicist considered the teen as “an ideal student” adding, “If there’s any possibility that you can come visit us at MIT, I would love to give you a tour of the centre for theoretical physics and the Kavli Institute for Astrophysics. You are the kind of student that we want at places like MIT and Harvard.”

At this point, it’s worth mentioning that Ahmed wished for attending MIT for college, as he stated earlier.

Don’t forget to share your opinion in this connection in the comments section below.

23 LAKH People Applied For The Post Of 368 Peons In Uttar Pradesh Secretariat, Including B.Tech and Ph.d Holders.
This Incidence Shows There Are Both Good Cop And Bad Cop