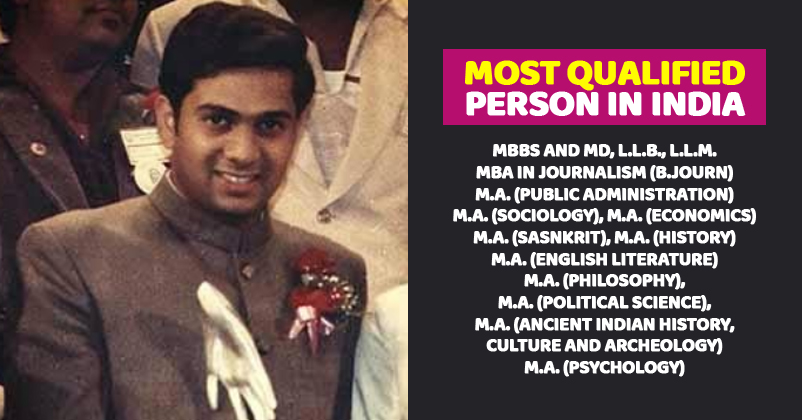 Dr. Shreekant Jichkar was one of the most brilliant personalities not only in India, but in the world. Despite holding several degrees, Jichkar was a humble person and a perfect husband. He was a perfect blend of studious social worker and a politician too. Here we mention you few amazing facts about Dr. Sreekant Jichkar the ‘Most qualified Person Of India’

1. Dr. Shreekant Jichkar was born into a Maratha family of wealthy farmers in Aajangaon near Katol in Nagpur district, Maharashtra. 2. Jichkar is a great husband of Rajashree, and a responsible father of daughter Maitrayee and son Yagyawalkya. 4. He began as a Medical Doctor (MBBS and MD) he then did his Law (LL.B.) with Post-graduation in International Law (LL.M.). He also did his Master’s in Business Administration (DBM and MBA) and in Journalism (B.Journ). This was not enough, he did his Masters in ten subjects which is M.A. (Public Administration ; M.A. (Sociology) ; M.A. (Economics); M.A. (Sanskrit); M.A. (History); M.A.(English Literature); M.A. (Philosophy); M.A. (Political Science) ; M.A. (Ancient Indian History, Culture and Archaeology); M.A (Psychology). He also got his D. Litt (Doctor of Letters) in Sanskrit. 5. He has written 42 University Examinations between 1972 and 1990, and he always scored ranks in all the exams. 7. In 1980 he was elected in Maharashtra Legislative Assemble becoming the youngest MLA in the country at 25. 8. After becoming the youngest MLA, he also became a very powerful government Minister holding 14 portfolios at a time. 9. He is one among those biggest personalities who own a personal library with more than 52,000 books. 10. Dr. Jichkar was also a successful academician, skilled painter, professional photographer, and a stage actor too.

11. He served as Minister of State, Government of Maharashtra and was also a member of Rajya Sabha. 12. Before being elected in Maharashtra Legislative Assembly, Jichkar was elected as President of the Nagpur University Student’s Council. 13. Dr. Shrikant Jichkar completely opposed separation of Vidarbha from rest of Maharashtra as he felt ‘we will have no funds from day one to run the new State’. 14. This great man traveled in most of the states in India speaking on the topics related to health, economics and giving religious discourses. 15. Dr Shrikant Jichkar was killed when his car collided with a bus near Kondhali, about 60 kilometres from Nagpur. He was a great inspiration to all!

Continue Reading
You may also like...
Related Topics:15 Amazing Things To Know About Dr. Sreekant Jichkar The ‘Most Qualified Person Of India’