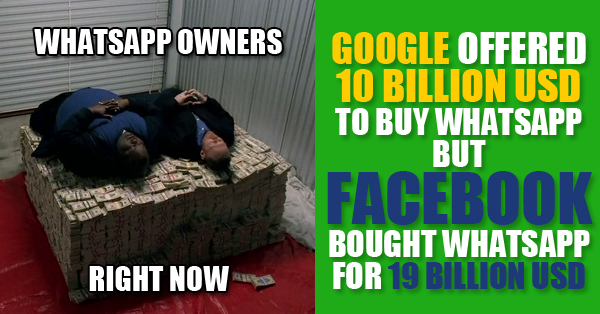 Whatsapp has a lot of effect in today’s generation, started as just a messaging service 5 years back in January 2010 currently it has more than 1 Billion downloads on android making it one of the most popular messaging apps on any platform. Whatsapp messenger is available in different operating systems including iOS, Android, BlackBerry OS, BlackBerry 10, Windows Phone, Nokia Series 40, Symbian, Tizen, Firefox OS. Whatsapp messenger was founded by two former Yahoo employees Brian Acton & Jan Koum.

1. Till Date Whatsapp has Never Spent a Single Penny on Marketing.

The company’s growth is all based on users feedback to their friends and family. 3. Jan keeps the following Note on his desk to focus on their goal Yes you read it right 4 Developers and 1 man heading them were responsible for 1 Billion Android Downloads. That is Huge. 5. Whatsapp has just 55 employees for their huge user base of over 900 Million 6. Google offered $10 Billion to buy Whatsapp. However Facebook bought it for $19 Billion 7. With 70 Million users, Largest number of Active Users on Whatsapp are from India 8. Whatsapp has more worth than NASA’s Annual Budget of 2010*

9. Whatsapp is setting new records in terms of total messages received and delivered. This was the latest tweet regarding messaged from Whatsapp Inc.

10. Whatsapp has more worth than Harley Davidson, American Airlines.

Whatsapp has also more worth than the annual revenue of Infosys and TCS combined. 11.  Whatsapp has a Special “HEART” Emoji

When you send it only once, it has a heart beat rate of 60bpm as that of a normal human being. 12. Whatsapp doesn’t store anything on their servers. That is why you need to sync your phone to use Whatsapp Web 14. One can use Whatsapp even without a Sim card. 15. Whatsapp is FREE for Lifetime*.

Yes you heard it right whatsapp is and will be free for lifetime.

Whenever you approach expiry date it gets increased to one more year. It was announced by Neeraj Arora Head of Whatsapp business , that Whatsapp is free for Lifetime in US ,India  and some other parts of the world. This was announced  recently so it is not applicable in the early years of Whatsapp.